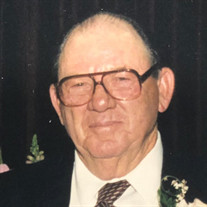 Mr. Willie Gene Bettis, 92, of Lampasas County, passed away at his residence on February 28, 2022. Mr. Bettis was born on August 29, 1929, in Cushing, Texas to Marcus Eugene Bettis and Dovie King Bettis. Willie grew up in Cushing. In 1946, circumstances allowed him to move to Jal, in southeast New Mexico. It is here he began to learn the welding trade. He welded for El Paso Natural Gas for 3 years. After this experience he was able to work as a mainline pipeline welder all over the United States and in Canada. He settled in Eunice, New Mexico and welded for another company, until 1969 when he was able to establish his own pipeline construction company. Mr. Bettis retired in 1980, at age 51. He and his wife Jimmie were driving through Lampasas County in 1980 and came upon a beautiful piece of land near Adamsville, Texas. This is where they made their home and spent the last 40 years. Willie and Jimmie Shoemake were married in 1948 in Jal, New Mexico, and enjoyed 64 years of marriage until Jimmies passing in 2012. Mr. Bettis is survived by his son, Gary Bettis and wife Pamela of Andrews, Texas, one brother, Charlie Bettis of Eunice, New Mexico, one sister, Olga Howard of Depew, Oklahoma, two grandchildren, Bradley Bettis and Abby Mathison, seventeen great-grandchildren and numerous nieces and nephews. He is preceded in death by his parents, his wife, Jimmie Shoemake Bettis, two daughters, Sharon, and Janice Bettis, one brother, Homer Bettis, and one grandchild, Ben Bettis. The funeral service for Mr. Bettis will be at 11:00 AM, on Thursday, March 3, 2022, at Adamsville Baptist Church with Reverend Dale Adams officiating. Burial is scheduled at 11:00 AM on Saturday, March 5, 2022, at Andrews North Cemetery in Andrews, Texas with Reverend Larry Brewer officiating. Arrangements are entrusted to Heritage Funeral Home of Lampasas, Texas.

Mr. Willie Gene Bettis, 92, of Lampasas County, passed away at his residence on February 28, 2022. Mr. Bettis was born on August 29, 1929, in Cushing, Texas to Marcus Eugene Bettis and Dovie King Bettis. Willie grew up in Cushing. In 1946,... View Obituary & Service Information

The family of Willie Gene Bettis created this Life Tributes page to make it easy to share your memories.

Mr. Willie Gene Bettis, 92, of Lampasas County, passed away at...

Send flowers to the Bettis family.