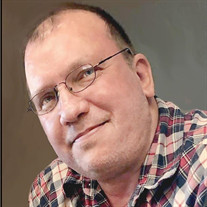 Tom Moseley, 53, died at his residence in Gatesville, Texas on June 3, 2021. He was born in Temple, Texas on October 20, 1967, to Sonny and Patsy (Goodson) Moseley. He remained in Coryell County all his life. Graduating from Gatesville High School in 1986, he then attended TSTC and became a Master Electrician, eventually starting his own Company, TM Electric. His first job was with Mike Atkinson Electric as a journeyman. He was in 4H and raised rabbits and pigeons. Tom loved playing dominoes and pitching horseshoes and excelled at both! He was the coordinator of the horseshoe event at Spring Ho in Lampasas for several years. Several of Tom’s relatives were born in October, and a huge birthday celebration occurred every year that Tom named Octoberfest. His favorite dogs were Skunk, a stray he adopted, and Benjamin Cartwright Moseley. Tom had a nickname for everyone, taking time to think it up, and made you feel special that one had been bestowed upon you! Tom attended Pearl Baptist Church as well as King Baptist Church. He loved spending time with his family and friends, cooking and having get-togethers. Tom had such a big heart, and he loved his family and friends with every bit of it. Tom was preceded in death by his paternal grandparents, Horace and Dora Moseley and maternal grandparents, Gerald Max Goodson and Lola Goodson-Hixon, an uncle, Jerry Goodson and his wife, Lila Goodson, and another uncle, Alvin Berry. Tom is survived by his mother, Patsy Stoneham and stepfather Henry Stoneham of Lampasas, his father, Sonny Moseley of Gatesville, his girlfriend Jennie Snelling of Copperas Cove, one daughter, Charliese Elizabeth Moseley-McGuffey of Lampasas, two sisters, Molley Moseley-Michell (Gibran) of Weatherford, Texas and Amy Moseley-Vann (Danny) of Lampasas, three grandchildren, Catelyn, Cylee, and Clara McGuffey, two aunts, Carla Moseley-Berry of Shiner, Texas and Mary Moseley-Chambers (Bob) of Waco, one uncle Ken Moseley (Judy) of Copperas Cove, numerous relatives, and literally too many friends to count. The funeral for Mr. Moseley will be at 2:00 PM on Sunday, June 6, 2021, at Heritage Funeral Home in Lampasas, the visitation will be one hour prior at 1:00 PM also at Heritage Funeral Home. Reverend Charles McKamie and Pastor David Booth will officiate the service. Burial will follow at Hillsdale Cemetery, east of Izoro, Texas. Arrangements are entrusted to Heritage Funeral Home of Lampasas.

Tom Moseley, 53, died at his residence in Gatesville, Texas on June 3, 2021. He was born in Temple, Texas on October 20, 1967, to Sonny and Patsy (Goodson) Moseley. He remained in Coryell County all his life. Graduating from Gatesville High... View Obituary & Service Information

The family of Tom Howard Moseley created this Life Tributes page to make it easy to share your memories.

Tom Moseley, 53, died at his residence in Gatesville, Texas on...

Send flowers to the Moseley family.