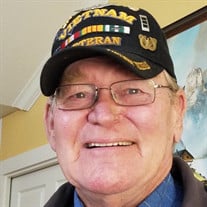 Robert Russell Stevens, Jr., longtime resident of Lampasas, Texas passed away on May 14, 2022, in Temple, Texas. He was born on October 11, 1947, in Bethlehem, Pennsylvania to Robert Russell Stevens, Sr. and Louise Ritter Stevens. Robert joined the US Navy on March 4, 1966 and served on the USS Holder, serving one tour of duty in Vietnam. After serving in the Navy, Robert enlisted in the US Army on September 3, 1970, where he served another tour of duty in Vietnam, flying helicopters. He continued his service in the Army flying helicopters, Mohawks, UH21 as well as other fixed wing aircraft. He retired from the Army in 1987. During his service to his country, Robert received the following commendations: Distinguished Flying Cross with two bronze oak leaf clusters, Air Medal, Army Commendation Medal with one bronze oak leaf cluster, Good Conduct Medal, National Defense Service Medal, Vietnam Service Medal with two bronze service stars, Armed Forces Reserve Medal, Army Service Ribbon, Overseas Service Ribbon with numeral one, Expert Badge with Rifle bar, Aviation Master Badge, the Republic of Vietnam Cross of Gallantry with Palm and Korea Defense Service Medal. Robert met Lee Ricker in Austin, Texas and it was love at first sight. They married on March 1, 1981 in Las Vegas and combined their families into one house full of love. Robert continued loving and providing for his family as a test pilot for Lockheed Martin. He also drove 18 wheelers with his wife Lee for a few years. His passion to fly returned and he flew helicopters in the Gulf of Mexico before retiring again in 2012. Robert enjoyed hunting with his sons-in-law Tony and Greg. If he wasn’t doing that, he was spending time with his sons, laughing, telling stories and spending time with their families. He also loved to visit his daughter in Alaska and going on adventures. He was so proud of everything his children accomplished. Robert visited Hawaii multiple times with his love, Lee. They loved sitting and fishing on the banks of the Colorado River together. They finished each other’s sentences and knew each other’s thoughts. They were halves of each other’s hearts. Robert was a Christian. Roberts surviving relatives include his wife, two sons, Bill Wilcox (Denise) of Seguin, Texas and Jason Stevens of New Bern, North Carolina, two daughters, Dana Brotherwood (Tony) of Lampasas and Amanda Bratten (Greg) of Fairbanks, Alaska, one brother Jimmy Stevens of Pennsylvania, two sisters, Pam Stevens, and Roberta Kessler, both of Bethlehem and his mother-in-law, Doris Ricker of Lampasas. He is blessed with grandchildren, Bethany, Maggie, Ella, Tyler, Brodie, Kameron, Ayden, Kristina, Brandon, Chelsea, Derrick, Cole, Lily and Allison, as well as numerous other family members and friends. He has one great-grandchild on the way very soon. Preceding Robert in death are his parents, sister, Pat Herlihy and his father-in-law, Ray Ricker. There will be a visitation for Mr. Stevens from 5-7 PM on Thursday, May 19, 2022 at Heritage Funeral Home. The funeral service will be at 11:00 AM on Friday, May 20, 2022 also at Heritage Funeral Home with Marcus Avalos officiating. Burial will follow at Oak Hill Cemetery with full military honors. There will be a livestream of the funeral at heritagefuneraltx.com under Mr. Steven’s tribute. Memorial donations to Susan G. Komen for the Cure at komen.org will be appreciated. Funeral arrangements are entrusted to Heritage Funeral Home of Lampasas.

The family of Robert Russell Stevens Jr. created this Life Tributes page to make it easy to share your memories.

Send flowers to the Stevens family.