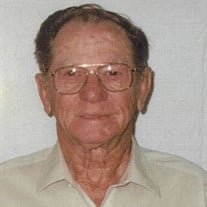 Richard Paul Wilson, 94 of San Saba passed away in College Station, Texas on March 1, 2022. Richard was born in San Saba, Texas to Richard and Grace Wilson on April 1, 1927. Richard had four brothers and two sisters. He loved his family very much. They were a very close family. In September of 1943, Richard joined the Navy. He was released from active duty in March 1946, and at that time the war had already ended. Richard didn't speak much about his time in the military until he got older. Richard's time in the Navy was spent on a boat delivering food to the troops on the island. One of his favorite stories was when he got to see one of his brothers while the Navy ships were docked out in the bay in the Pacific. Richard married Patsy Brown September 11, 1946, soon after the war. After marrying, dad and mom moved to San Antonio and Richard started working for the City Public Service Board as a mechanic, many of Richard's brothers and sisters lived in San Antonio as well. In 1947, his first child Rick was born. His other two children were born in 1952 (Sheila) and Paula (1953). Richard and Patsy and the family attended Bellaire Baptist Church. Richard was ordained as a Deacon in the church. Richard and Patsy worked with the youth group for several years. One year Richard drove the church bus full of youth to Montana. In 1968, Richard and Patsy and the girls moved to Bulverde, Texas north of San Antonio. In 1970, the girls were involved in an auto accident and Rick's wife was fatally injured and Paula had serious brain injury. In 1981, Richard's first grandchild Logan was born. Logan was followed by a granddaughter Stacy in 1984. Dad was so proud of his grandchildren. One special event was his granddaughters wedding in 2008. Richard retired from CPS in July of 1983. Richard and Patsy did some traveling, he also worked part time for the Post Office. Richard decided to add a second story addition to the family home. Richard enjoyed staying busy during his retirement. One of his biggest hobbies Richard really enjoyed was playing golf on a daily basis. Richard, Patsy and their daughter Paula later moved back to San Saba to be with family. They became members of Parkview Baptist Church. They continued traveling with friends in San Saba. Patsy passed away on June 1, 2002, when she became sick with cancer. After Patsy's death, Paula had to be placed in a nursing home across the street from the family home. Richard would walk across the street to visit Paula daily. In 2008, Richard married Betty Bearden. They were married for 13 years and did quite a bit of traveling. One of their trips was to Las Vegas to watch Logan compete in a bull riding NPRCA finals. In his later life with Betty, Richard was diagnosed with dementia. In 2021, Betty passed away and Richard spent his last 11 months living at The Waterford Assisted Living center in College Station. Richard was preceded in death by his parents, his first wife Patsy; second wife Betty; daughter Paula Wilson; son Rick Wilson; four brothers Harvey, Elmer, Ellis, and Clifford; two sisters Grace Bell and Lillie Mae. Richard is survived by one daughter, Sheila Knibbe; two grandchildren, Logan Knibbe and Stacey Grace; and one great-granddaughter, Kaylan Grace. Funeral arrangements are entrusted to Heritage Funeral Home of San Saba. Please view Mr. Wilson's online memorial at www.heritagefuneralhomes.com

Richard Paul Wilson, 94 of San Saba passed away in College Station, Texas on March 1, 2022. Richard was born in San Saba, Texas to Richard and Grace Wilson on April 1, 1927. Richard had four brothers and two sisters. He loved his family... View Obituary & Service Information

The family of Richard Wilson created this Life Tributes page to make it easy to share your memories.

Send flowers to the Wilson family.