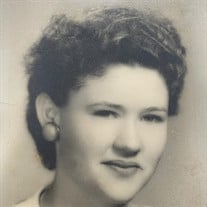 Martha Louise Shifflett, 79 of Bertram, Texas died at Seton Highland Lakes Hospital in Burnet, Texas on Sunday, May 16, 2021. Martha was born to Willis Jeff (Rowdy) Joiner and Laverne Elizabeth King Joiner on December 25, 1941 in Paint Rock, Texas. Mrs. Shifflett had been a seamstress at Terri-Lynns’s Sewing Factory in Lampasas during the 1970’s. She retired from Skinny’s convenience stores in Abilene, Texas and moved to Bertram. Martha loved to go fishing whenever she could and was an enthusiastic Bingo player. She was a devoted grandmother and great grandmother. She was preceded in death by her parents, three brothers, Jimmy, Julius, and Jeff Joiner, and by one son, Shawn Shifflett. Survivors include four sons, Bobby Shifflett of Bertram, Michael Shifflett of Abilene, Greg Shifflett of Lake LBJ, David Shifflett and wife Norma of Lampasas, stepson, Ronnie Shifflett, and wife Debra of Abilene, and stepdaughter, Judy Cox, and husband Brad of Cleburne. She is also survived by two brothers, Johnny Joiner of Broaddus, Texas, and Lloyd Joiner of Paint Rock, and by two sisters, Wanda Rock of Paint Rock and Linda Harrell of San Angelo. Martha has nine grandchildren and 19 great grandchildren as well as numerous nieces and nephews that also survive. There will be a visitation for Martha Louise Shifflett at 11:00 AM on Monday, May 24, 2021 at Heritage Funeral Home in Lampasas. Arrangements are entrusted to Heritage Funeral Home.

The family of Martha Louise Shifflett created this Life Tributes page to make it easy to share your memories.

Send flowers to the Shifflett family.