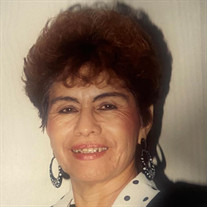 Macrina R. Esquivel, 84 of San Saba passed away on Sunday, February 14, 2021, surrounded by her loving family. Macrina was born on April 22, 1936 to Ernesto Sr. and Amelia Reyes of San Saba. Macrina married Lorenzo P. Esquivel on January 13, 1958 and they celebrated their 63rd wedding anniversary this year. Macrina worked as a CNA for 10 years and she also worked at the San Saba Cap Inc. for 11 years. She worked 15 years at the San Saba Pecan Shelter. She was a member of St. Mary’s Catholic Church of San Saba. Macrina enjoyed sewing quilts and making crafts for her family and for the people that needed something. She enjoyed cooking; she was best known for her tamales. During Thanksgiving and Christmas, she would make tamales for her family and for people in Brownwood and San Saba. She also cracked and peeled pecans on the holidays and sold them every year. She and dad were number one fans of the San Saba Armadillos football team never missing a game. They also were number one fans of the San Saba lady Dillos basketball team and were there before the games started. Every spring her and my dad got their garden ready and my mom would go to the courthouse and set up her little stand with her fresh veggies and stayed till she sold out. My mom and dad enjoyed going to a lot of occasions; they loved to dance and visit with their friends. Macrina is survived by her husband Lorenzo, daughter, Rosemary and husband Louis of San Saba, Hermina and her husband Abel Jr. of Brownwood, son, Larry and wife Amy of Brownwood, daughter Blanca and husband Charlie of Brownwood, daughter, Tammy and husband Cade of Richland Springs, and grandson Moses. She is survived by her grandchildren and her great grandchildren whom she loved and cherished and was proud to be their Momo. Grandchildren include Mathew Esquivel and wife Cara of Brownwood, Christina Brockman of San Saba, Sabel Romero and husband Jose of San Saba, Megan Cisneroz and Ryan Wimberley of Brownwood, Bianca Couch and husband Patrick of Brownwood, Nina Paredez of Austin, Macy Martin of College Station, Issac Zepeda and wife Sam of Brownwood, Brooke Esquivel of Brownwood, Emily and husband Jay Short of San Saba, Marci Martin of Richland Springs, Austin Cisneroz of San Saba, and Cody Martin of Richland Springs. Great grandchildren include Mason Esquivel, Cinzlea Stanton, Skyler Romero, Maitlyn Esquivel, Jayden Romero, Jordan and Jaxson Wimberley, Cameryn Brockman, Kayson Zepeda, Brynleigh Couch, Gio Esquivel, McKinley Schultz, Leighton Couch and Eleanor Short. Sisters, Martha Gonzales of San Saba, Leonilia Gill of Lampasas, Maria Gonzales of Coolidge Arizona, and brother Ernesto Jr. Reyes of San Saba. Macrina is preceded in death by her parents, Ernesto Sr. and Emilia Reyes, Sister, Emilia Campos, Three brothers, Juan, Jesus and Joe Rayes, One niece, Delfina Reyes, and one nephew, Mario Gill. Visitation will be held Friday, February 26, 2021 from 6:00 – 8:00 PM. Rosary will follow from 7:00 – 8:00 PM. Mass of Christian Burial will be held at St. Mary’s Catholic Church in San Saba, Texas at 11:00 AM, Saturday, February 27, 2021. Pallbearers, Christinia Brockman, Sabel Romero, Megan Cisneroz, Bianca Couch, Nina Paredez, Macy Martin, Brooke Esquivel, Emily Short, and Marci Martin. Honorary pallbearers, Moses Esquivel. In lieu of flowers the family request that donations be made to St. Mary’s Catholic Church in San Saba, Texas. Funeral arrangements are entrusted to Heritage Funeral Home of San Saba.

The family of Macrina R. Esquivel created this Life Tributes page to make it easy to share your memories.

Send flowers to the Esquivel family.