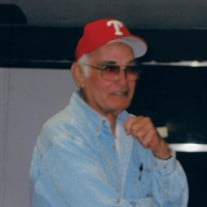 Mackie Gene Stevens Mackie gene Stevens died Thursday, July 22, 2021 at a local nursing home. Mackie was born January 5, 1931 near the Democrat Community in Mills County, Texas. His parents were Silas Stevens and Mary Shelton Stevens. He was raised in the Democrat Community and later moved to Brownwood. Mackie graduated from Zephyr High School in 1948. He attended Daniel Baker College and served in the Air Force from December 1950 to December 1954. Most of his service was in Air Defense in Pennsylvania. Mackie married Eugenia (Katy) Gilbrech on March 6, 1951 in Pascagoula, Mississippi. He is survived by his wife; his daughters, Vanessa (Doug) Tervooren, Elisa (James) Chesser, Dana (Mike) Allen, and his sons Gil Stevens and Justin (Gina) Stevens; his grandchildren Chad Boyd, Jason Boyd, Jacob Boyd, Jamie Ramirez, Silas Tervooren, Brandon Ballard, Courtney Neal, Brent Mackey, Scott Mackey, Amanda Holik, Tell Stevens, Jordan Stevens, and Chris Schmidt; 33 great-grandchildren, and 4 great-great-grandchildren. He is predeceased by his parents; his siblings Garland Stevens and Yvonne DiSciullo; his daughter Pamela Boyd; and by two grandchildren, Joshua Stevens and Sara Tervooren. Mackie was a lifelong farmer and rancher. Over 30 years of that was as a dairy farmer. He was a lifetime fan of the Brownwood Lions and supporter of the Democrat Community Center and Democrat Cemetery. Family requests that in lieu of flowers donations be given to charity of givers choice.

The family of Mackie Gene Stevens created this Life Tributes page to make it easy to share your memories.

Send flowers to the Stevens family.