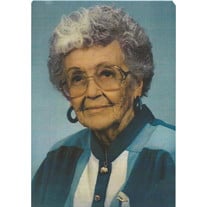 Lucille Griffith Freeman, 93, died March 9, 2014. She was born September 2, 1920 in Ryan, Oklahoma to William and Mary Elizabeth Dewbre. The family moved to Texas soon afterwards where she lived most of her life. Lucille Freeman was preceded in death by her parents and nine brothers and sisters. She was also preceded in death by her first husband, Henry Dean (H.D. "Jerry") Griffith of Brady, Texas and her second husband Don L. Freeman of Eden, Texas and her long-time friend, Viola Gary of San Marcos, Texas. She is survived by her son, Deryl (Jean Ann) Griffith of Eufaula, Oklahoma, her daughters, Charlotte Bryson of Nashville, Tennessee and Vicki (Jimmy) Brown of Kilgore, Texas as well as the beloved grandchildren Melanie Rodges, Scott Griffith, Michael Griffith, Jerry Bryson, Kelly Bryson, Natasha Bryason, Timothy Brown, Karin Branton, Dawn Salazar, and Deanna Morgan; 24 great-grandchildren and 11 great-great-grandchildren; and nieces and nephews. All have special memories of their "Babba." She will always be their "Yellow Rose of Texas." Lucille Freeman was a beautiful, active and vibrant woman who made friends quickly and loved to spend time entertaining her friends and family. She rarely met a stranger. She was creative artist and liked to paint, sew and cook. She made award-winning dolls and fashionable period clothing for antique dolls. Her Old World cross stitching is treasured by her family as are her delicately hand-stitched quilts. Her primitive oil paintings depicted the beauty of the rural ranching life she experienced. She had a passion for antiques and had an antique store in Brady for many years. She and her husband, H.D. "Jerry" Griffith ranched in Texas, New Mexico and Oklahoma and also owned the Heart of Texas Livestock Commission Company in Brady. She was active in her children's lives, never missing a dance or piano recital, football game or special event they had. She was the perennial "Room Mother" at her children's schools. She was proud of being on the Championship Bowling Team in Brady. She was also an avid dancer, who taught her grandchildren and great-grandchildren the artistry of the Texas Two- Step as well as the game winning strategies for playing cards and dominoes. Most importantly, she modeled resiliency and determination for them. She was a long time member of the First Baptist Church in Brady and then in Eden. In Eden, Texas, she felt blessed to have fifteen wonderful years with her second husband, Don L. Freeman who was a native of Eden and a well-known rancherand farmer. After Mr. Freeman died, Mrs. Freeman donated the building for the museum in Eden which was named in his honor, The Don Freeman Memorial Museum. In all things in her life, Mrs. Lucille Griffith Freeman proudly "did it her way." Funeral services will be held at Heritage Funeral Home in Brady, Texas on March 12, 2014. Visitation for family and friends will be from 1:00 P.M. till 2:00 P.M. Graveside services will immediately follow at Rest Haven Cemetery in Brady, Texas. Family request that donations be made to Don Freeman Memorial Museum in Eden, Texas, Tennessee Voices for Children, or the Cal Farley Boys Ranch in lieu of flowers.

Lucille Griffith Freeman, 93, died March 9, 2014. She was born September 2, 1920 in Ryan, Oklahoma to William and Mary Elizabeth Dewbre. The family moved to Texas soon afterwards where she lived most of her life. Lucille Freeman was preceded... View Obituary & Service Information

The family of Lucille G. Freeman created this Life Tributes page to make it easy to share your memories.

Send flowers to the Freeman family.