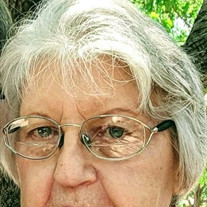 Lillie Doris Estep Sharp was born October 19, 1940, in Menard, Texas to Elige Wesley "Blue" Estep and Clemmie Lorene Hinesly Estep. Lillie attended Menard public schools until 1956 when the family moved to Lamesa where she graduated from Lamesa High School in 1959. Lillie married Ronald Sharp on June 12, 1959, in Lamesa and they were married for 57 years before his death in 2017. They spent one year in Indiana where Ron was from and then moved back to Texas living in Big Spring for two years, then back to Lamesa. Lillie was employed as a telephone operator for GTE, bookkeeper for L.M. Burney Wholesale, Finance & Insurance Manager for Bob Brown Oldsmobile Cadillac GMC, bookkeeper and dental assistant for Wendall Burnside DDS, and finally retired after serving as assistant manager at Medical Arts Clinic. Lillie had an impeccable work ethic and was a treasured employee. After Ron's death in 2017 she moved to San Angelo to be closer to her son and grandchildren. Lillie's grandsons were absolutely the light of her life, and she cherished every moment spent with them. The boys spent weeks at a time with Lillie and Ron from the time they were old enough to, and had many adventures, vacations, and trips to the playground. Lillie passed away January 4, 2022, at Shannon Medical Center in San Angelo after a brief illness. She was preceded in death by husband, Ronald Sharp, son, Roger Keith Sharp, her parents, Elige and Clemmie Estep, brother, Maurice Estep, sister-in-law, Donna Estep, sister, Wilton "Willie" Hamilton, and brother-in-law, Jack Hamilton. Lillie is survived by her son, Harold and wife Vonnie Sharp, grandsons, Kyle and wife Sydney, Elijah, and Matthew all of San Angelo and great grandchildren, Brantley, Jaxson, Kinsley, and Haegen. She is also survived by her cherished sister Sherlyn Scott and brother-in-law Don of Abilene as well as numerous nieces, nephews and friends that she loved dearly. Visitation will be Friday, January 7, 2022, from 6:00 - 8:00 PM at Branon Funeral Home. Funeral services will be Saturday, January 8, 2022, at 10:00 AM in the Branon Funeral Home Chapel with Matthew Hamilton, great-nephew of Aledo officiating. Burial will be in the Dawson County Cemetery. Memorials may be made to the Texas Southwest Council Boy Scouts of America in San Angelo or to the charity of your choice. Funeral arrangements are entrusted to Heritage Funeral Home of Menard. Please view Ms. Sharp's online memorial at www.heritagefuneralhomes.com

The family of Lillie Sharp created this Life Tributes page to make it easy to share your memories.

Send flowers to the Sharp family.