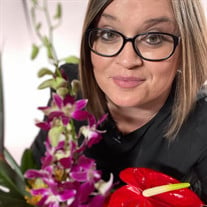 Kassie Ann Baker, 38, of Lubbock, Texas, passed away at her residence on November 9, 2021. Kassie was born in Killeen, Texas on May 4, 1983, to Vernon Dale Baker and Lisa Ann Coble Baker. She had lived in Lubbock for 20 years. She moved there one week after graduating from Lampasas High School in 2001. In high school, Kassie was involved in a wide variety of sports. She was the National Championship Power Lifter for 2001 and 2002 and still holds the Lampasas record and was a member of the National Honor Society. She attended Texas Tech and South Plains Junior College in Lubbock where she received her Associates degree. Kassie was a Texas Master Florist and owned and operated her own shop, House of Flowers and was President of SEA, also known as "The Breakfast Club", the small business association in Lubbock. Kassie was serving as the First Vice President of the TSFA (Texas State Florist's Association) and was also currently serving as co-chair of Education and Development and had been doing so for the past six years. Kassie was a valuable and integral member of the TSFA over the years and had been involved in numerous aspects, such as, serving on the Membership Committee, the Industry Communication Committee, TSFA Showcase Chair; in 2021, she served as Workshop Chair at the Hands-On Expo, she is currently the editor of the Professional Certified Florist Program, had been a Texas State Florist Education instructor and West Texas/New Mexico Florist Associations Retail Director. Kassie was the proud recipient of an award from the Ronald McDonald House in Lubbock, and the TSFA's Hall of Fame Award. Kassie's shop, House of Flowers was also the winner of the TSFA's Best Of the West. Kassie is survived by her parents, Vernon and Lisa Baker, of Lampasas and Buchanan Dam, two sisters, Jennifer Harris and J. P. of Lampasas, and Jessica Fincher and Justin of Lubbock, her aunts and uncles, Deb and Terry Lindsey, Brandy and Cory Davis, Angela and Ryan Brisben, and John and Ryan Baird, nieces and nephews, Jonathan Harris, Kadi-Ann Harris, Kaelie Fincher and Radley Fincher and her grandparents, Joann (G.G., Grandma) Morgan and Larry (Peepaw) and Janet Baird. She is also survived by her special friends, Justin Hughes, Tiffany and Brandon Neal and numerous others that made her life complete. She will be missed by her fur babies, Myles and Abbi. Numerous other loving relatives survive Kassie. Kassie is preceded in death by her son, Mason Riley Baker, grandparents, James Coble, J.C. Morgan, Patsy and Dalton Baker, and Nan Baird and two cousins, Shelly Lindsey, and Wyatt Eicher. The visitation for Kassie will be at 10:00 AM at First Street Church of Christ with the funeral immediately following at 11:00 AM, officiated by Rodney Andrews and Tracy Rash. The burial will be at Oak Hill Cemetery following the service. Pallbearers serving will be Corey Greiner, Scott Peterson, Aaron Mortensen, Elishah Flores, Martin Hutton, Marcus Chapa, John McMillan, and Justin Marcellus. Honorary pallbearers will be Gary Cloud and Randy Clark. An additional service will be held on November 20th at 10:00 AM at Heights Fellowship in Lubbock, Texas, officiated by Mike Martindale and Brandon Gwinn. Arrangements are entrusted to Heritage Funeral Home of Lampasas.

Kassie Ann Baker, 38, of Lubbock, Texas, passed away at her residence on November 9, 2021. Kassie was born in Killeen, Texas on May 4, 1983, to Vernon Dale Baker and Lisa Ann Coble Baker. She had lived in Lubbock for 20 years. She moved there... View Obituary & Service Information

The family of Kassie Ann Baker created this Life Tributes page to make it easy to share your memories.

Kassie Ann Baker, 38, of Lubbock, Texas, passed away at her residence...

Send flowers to the Baker family.