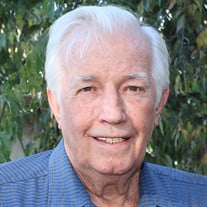 John Frank Snell, age 87, passed away at his home on Sulphur Creek in Lampasas, Texas on Oct. 16, 2021. He was born on Sept. 7, 1934 in San Angelo, Texas to Casbeer Snell and Margaret Josephine Alexander Snell. He lived in Rankin, Texas until he was seven years old and moved to Lampasas, Texas with his family. He graduated from Lampasas High School in 1952. While in high school he was on the football, basketball and track teams. John grew up hunting and fishing with friends and often talked about catching catfish, hunting deer and raccoons. This continued throughout his life and there are countless stories of friends that enjoyed fishing and hunting on Sulphur Creek. John held a number of interesting jobs in his youth; notably, he worked as a ridge runner fighting fires in Idaho and as an oil field surveyor in Tyler where he knew Elvis Presley and allegedly went on a double date with him. He enlisted in the Navy in 1956, completing the flight-training program in Pensacola, FL. He was honorably discharged in 1958. After his two years in the Navy, he owned and worked on a hunting ranch in Del Norte, CO. He sold the ranch and spent a summer on a yacht sailing from Florida to Corpus Chisti. John graduated from the University of Texas at Austin in 1966 with a Bachelor’s degree in Geology. He married Leah Ann Weaver on September 17, 1966 and they lived in Corpus Christi while John worked for Coastal States. John and Leah then moved to Tucson, AZ, where John worked as a geologist for Pima Copper Mine. They later moved to California where John worked for Kaiser Cement and was credited with expanding the Kaiser Cement plant and Limestone Mine in Cupertino, CA. He also developed the first bituminous coal mine in Texas. In 1977, John and Leah moved to Lampasas where John worked as an independent contractor, invested in oil and gas wells, prospected for gold in Arizona, and raised and raced quarter horses. While his children were young, John became involved with youth soccer and helped organize the youth soccer association. He further assisted with designing the Gavin Garrett soccer fields in Lampasas, leading an effort to ensure that construction left many of the nearby pecan trees standing for all players and spectators to enjoy. John rarely—if ever—missed a sporting event when his children were involved, and was often recognized as the loudest fan in the audience. He coached youth soccer and basketball, and attended many soccer, track, football, basketball, volleyball, tennis and gymnastics competitions when his children and grandchildren participated. As a graduate of the University of Texas in Austin, he watched numerous Longhorn football and basketball games over the years and often used “Hook ‘em” as a greeting. John was an avid supporter of the Hancock Springs swimming pool and worked tirelessly to ensure the pool remained open when it was at risk for closure. John was known to swim laps and visit with the other swimmers well into his 80s. He was a self- described “rock hound” and collected rock samples from around the world. He was proud to assist numerous high school students with their rock collections for science class. John also developed an interest in arrowheads and Native American artifacts and became actively involved in finding and identifying such relics on his property. This eventually led to a number of volunteers led by the University of Texas Gault School of Archaeological Research conducting excavations on his property in an attempt to form a timeline for the presence of the earliest inhabitants of Lampasas County. John was married to Leah for 55 years and family was very important to him. He enjoyed spending time with his children and grandchildren more than anything else in the world. John was preceded in death by his parents, sister Daphne Snell Kofman, and brother Casbeer Snell, Jr. John is survived by his wife; son, Lewis and wife Michelle of Waco, TX; daughter Margaret (Meg) Bloch and husband Mike of Odessa, TX; brothers Maynard Duwain Snell and MA Snell of Lampasas and three grandchildren Rylie Snell, Hayden Bloch and Mallory Bloch. Graveside burial will take place at Oak Hill Cemetery on Friday, October 22, 2021 at 3:00 p.m. with visitation starting at 2:30 p.m. In lieu of flowers, contributions may be made to Hancock Springs Free Flow Pool in Care of the City of Lampasas at 312 E. 3rd St., Lampasas, Texas 76550 or to the Lampasas County Museum. Thank you to New Century Hospice for the outstanding care they provided during his illness. Arrangements are entrusted to Heritage Funeral Home of Lampasas.

John Frank Snell, age 87, passed away at his home on Sulphur Creek in Lampasas, Texas on Oct. 16, 2021. He was born on Sept. 7, 1934 in San Angelo, Texas to Casbeer Snell and Margaret Josephine Alexander Snell. He lived in Rankin, Texas until... View Obituary & Service Information

The family of John Frank Snell created this Life Tributes page to make it easy to share your memories.

John Frank Snell, age 87, passed away at his home on Sulphur...

Send flowers to the Snell family.