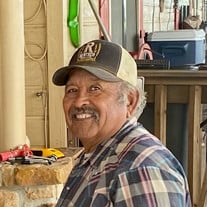 Joe Davila, III, 71, of Lohn, was called home to join the angels on January 7, 2022. He was born in Seguin, Texas to Jose and Maria (Torrez) Davila on November 18, 1950. At a young age Joe and his siblings learned a work ethic from their parents for which Joe was known by anyone who knew him. Joe was a hard-working man who had many types of work that he enjoyed doing. Little Joe got the greatest enjoyment from his work on horseback - he loved to cowboy. Most people in the Lohn Valley have relied on Joe's varied work skills. He could do almost any job, and the Lohn Valley knew Joe to be reliable hand. For twenty-seven years Joe worked at Lohn School-driving buses, maintenance, janitorial work, tennis coach, and driving LaRue Samuelson and her cheerleaders and drill team girls around Central Texas to camps, ball games and other events. Joe was the right-hand man for the Lohn School ag teachers whenever they needed help. After Little Joe retired from Lohn School in August of 2007, he always had a work project that was awaiting his attention, yet he made time for family. Joe loved to work, but family was his greatest treasure. He worked alongside his father until Papa Joe passed in 1998. Little Joe and his brother Fred cared for their mother until her passing in 2005. At the time of his death Joe and his brother Fred were partners in Davila Farms. Joe never married, but he considered all the Lohn School students as his own. Joe's nieces and nephews who attended Lohn School while Joe worked there always had snack money if needed and a firm, comforting hand in difficult times. However, when the nieces and nephews had done wrong, they hoped Uncle Joe did not learn about it; he gave little comfort in those times, and firmly suggested that doing "right" was the better path. Joe is preceded in death by his parents, an infant brother, and a niece. Joe is survived by two brothers, Alfred Davila and Louis Davila of Lohn, one sister, Anna Freeman and husband Leon of Lohn, three nephews, and four nieces. Visitation will be held from 5:00 to 7:00 PM Tuesday, January 11, 2022, at Heritage Funeral Home. Funeral service will be held at 10:00 AM Tuesday, January 12, 2022, at Heritage Funeral Home in Brady with the Keith Simpson, officiating. Burial will be at Marion Cemetery. Pallbearers will be Ken Knebel, David Huie, Ronnie Moore, Michael Short, Josh Brooks, and Joseph Beach. Honorary Pallbearer Ernie Johnstone Memorials may be given to Marion Cemetery, Lohn Valley Improvement Association, or Lohn Volunteer Fire Department. Funeral arrangements are entrusted to Heritage Funeral Home of Brady. Please view Mr. Davila's online memorial at www.heritagefuneralhomes.com

Joe Davila, III, 71, of Lohn, was called home to join the angels on January 7, 2022. He was born in Seguin, Texas to Jose and Maria (Torrez) Davila on November 18, 1950. At a young age Joe and his siblings learned a work ethic from their parents... View Obituary & Service Information

The family of Joe Davila created this Life Tributes page to make it easy to share your memories.

Send flowers to the Davila family.