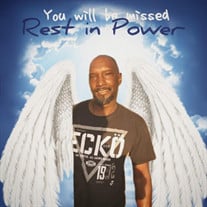 Jerome Racie Jackson was born February ,13,1980 to Ricky Jackson & Veronique Jackson in Midland Texas. Jerome attended Palm Dale elementary, and later Maryvale High School in Phoenix AZ. As a teenager Jerome and his friends would write, create, and perform locally in Phoenix, AZ. Jerome spent time training in Martial arts while working management position in chain restaurants. In 2012 Romie completed training for his CDL, and then became a Truck Driver, driving across the Country while settling down in Texas. Jerome biggest accomplishment was the birth of his son Phoenix Xavier Jackson, and the union with his fiancé Elizabeth Lopez and daughter McKymbree Smith. As that union Jerome and Elizabeth was baptized together in 2017, in the of Jesus by Gods Glory Apostolic Church of Mesa, AZ. Family called him Romie, friends called him Snoop. Known by many names he was always so full of life. From the moment God blessed him into the whom he never stopped moving. This is the very reason he was named Racie. Romie was always two steps ahead, he thought he would just skip crawling and get straight to walking at 10 months old. These were signs that nothing was going to slow him down. Jerome was a brilliant mind, his two favorite things to use was his mind and hands. He was considerate of all, and would do anything for anybody. He was a kind spirit blessed with a superpower of a smile that would light up a room, as he was never afraid to use it. He was wise and always listen to all sides. Romie didn’t have friends he had family. With the most excitement he would often use phrases like “what’s up Sista…. “to the moon, “and most important “GODS not done with me yet”. He never stopped planning and never stopped living life to the fullest. Jerome is preceded in death by his mother Veronique Jackson, and Grandmother Mattie Manley Jerome leaves to cherish his memory by his father Ricky D. Jackson (Fiancé) Elizabeth Lopez, son Phoenix Jackson, daughter McKymbree Smith, 1 brother James Jackson, wife (Cremella), 2 sisters Andrea Jackson, Shawndra Jackson fiancé (Jamie Tarver)3 Nieces, Temya jackson, Trinity Tarver, Donna Reed, 1 nephew Justin Tarver, niece Ryann Lopez, nephew Larry Lopez, Eli Lopez, and a host of Family and Friends.

The family of Jerome Racie Jackson created this Life Tributes page to make it easy to share your memories.

Send flowers to the Jackson family.