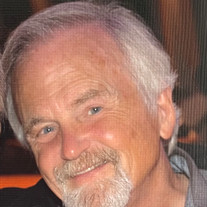 Grady Lynn Harris passed away unexpectedly at his home in San Saba, TX on August 25, 2021, but was totally expected at heaven's gate. Grady is survived by his wife, Georgia of 32 years. He was proud to be a Gideon, an organization that distributes Bibles throughout the world and in hotels and medical facilities. He also loved his church family at The Father's House in San Saba, and they loved him. He was born in Ft. Worth, TX to his mother, Laverne Harris Murray on June 3, 1948, and his father Chester Harris. He was the only child and a true gift from God to his mother, as he was born on her birthday. He graduated from high school in Corsicana, TX in 1965 and attended the University of Texas in Austin from 1965 - 1970. Grady was gifted in many areas. In high school he excelled in mathematics and science, and in college majored in Political Science. His talents included the ability to draw and later used those abilities when developing his career as a graphics artist and working in the field of screen printing. HIs work history included working as art director and screen printing manager for the San Saba Cap company from 1984 - 1999. The company decided to discontinue cap manufacturing and moved their printing business on to Kerrville. However, the San Saba company was purchased by two other companies, Vanguard Industries and later Pohler Brothers who continued manufacturing caps. When cap manufacturing no longer became a viable business for a US company, he decided to try his hand at owning his own screen printing business in San Saba, known as Texas Screen Graphics. His artistic ability could be seen on many of the designs for San Saba football and athletics, and companies throughout the United States from the east to west coast. One of his proudest accomplishments was overcoming alcoholism. The date July 15, 1980 was the last time he took a drink. He tried to encourage others that they too could overcome their addictions by acknowledging a higher power than themselves. While Grady never had any children of his own, he cherished and loved his wife's children, Angela Miller Chambers, Jonathan Miller, and Deborah Miller Smuts and they loved him. His life was filled with the joy of experiencing "family" through them and their children and grandchildren. In lieu of flowers, contributions can be made to the San Saba Gideon's chapter, P.O. Box 502, San Saba, TX 76877.

Grady Lynn Harris passed away unexpectedly at his home in San Saba, TX on August 25, 2021, but was totally expected at heaven's gate. Grady is survived by his wife, Georgia of 32 years. He was proud to be a Gideon, an organization that distributes... View Obituary & Service Information

The family of Grady Lynn Harris created this Life Tributes page to make it easy to share your memories.

Grady Lynn Harris passed away unexpectedly at his home in San...

Send flowers to the Harris family.