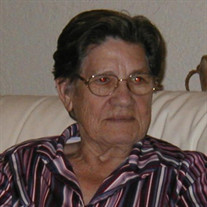 Dixie Marie Robbins of Seagoville, Texas passed away on Saturday evening March 6, 2021 of natural causes at The Manor at Seagoville nursing facility in Seagoville Texas at the age of 88. Dixie was born in San Saba to Rosa Evelyn Grumbles-Faught on March 2, 1933. She grew up in the San Saba area and attended school at San Saba, although she dropped out early to marry, she did finish in Dallas with a GED in 1969. She married by eloping to Billy Kirk Robbins on July 29, 1949 in Lampasas Texas. They moved around for a few years as he followed work opportunities and settled in Dallas Texas in 1960. Later retiring to Seagoville Texas on 16 acres with their own grove of pecan trees which she loved. Happily married until his passing in 2001. She worked as a lunchroom pastry cook for Dallas Independent School District at John B. Hood Jr. High School for ten years. She also volunteered at several Senior Centers in Dallas as an Exercise Class Leader. She worked for the Seagoville City Senior Center as a lunch server for several years. Dixie loved to Quilt. She helped teach quilting at the Seagoville City Senior Center while they worked on several charity quilting projects. Dixie and Billy travel extensively throughout the connected states enjoying the State and National Parks and other historical landmarks. While at The Manor at Seagoville nursing facility she spent her days reminiscing about her life and travels with other resident friends and employees. She became known as the Puzzle Lady for she was always working on jigsaw puzzles in the lobby while visiting with every passerby. Bingo had become a real fun activity for her at the Manor. Although she did not attend any formal Church during her last few years she was baptized and read her Bible every day with an understanding that we are not in total control of our lives that a higher power makes the final decision. She enjoyed the Gospel Singers and Preachers that volunteered at the Nursing Home. Dixie will be laid to rest next to her husband Billy Kirk Robbins and two sons Baby and Bob Alan Robbins in the Wallace Creek Cemetery San Saba Texas. Dixie is also preceded in death by her mother Rosa Evelyn Grumbles-Faught, stepfather J. C. Faught and son in-law Joseph Sultana. Dixie is survived by Daughter-Mary Linda Robbins-Sultana of Farmers Branch, Texas, Daughter-Sheila Marie Robbins-Johnston and husband Glen of Big Sandy, Texas, Son-Billy Jack Robbins and wife Carolyn of Seagoville, Texas, Sister-Rosalee Grumbles-Wilson of Alma, Texas, Grandson-Jason Sultana and wife Kate of Farmers Branch, Texas, Grandson-James Bryan Johnston and wife Summer of Henderson, Texas, Grandson-Kevin Ray Johnston and wife Wendi of Big Sandy, Texas, Granddaughter-Danita Robbins and William Babcock of Seagoville, Texas, Grandson- John Allen Robbins and wife Katie of Fort Worth Texas, Grandson-Steven Matthew Robbins of Texas, Niece-Mahala Jean Wilson-Thornton and husband Fred of Duncanville, Texas, Niece-Annette Wilson and Barry Taylor of Alma, Texas, Also 10 Greatgrandchildren. Funeral arrangements are entrusted to Heritage Funeral Home of San Saba.

Dixie Marie Robbins of Seagoville, Texas passed away on Saturday evening March 6, 2021 of natural causes at The Manor at Seagoville nursing facility in Seagoville Texas at the age of 88. Dixie was born in San Saba to Rosa Evelyn Grumbles-Faught... View Obituary & Service Information

The family of Dixie Marie Robbins created this Life Tributes page to make it easy to share your memories.

Dixie Marie Robbins of Seagoville, Texas passed away on Saturday...

Send flowers to the Robbins family.