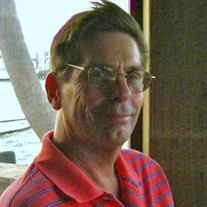 David Dennis Mitchell Jr. passed away January 21, 2020 in Dallas, Texas. He was born May 10, 1961, in Corpus Christi, Texas to David Dennis Mitchell [Sr.] and Hazel Woods Mitchell. He also lived in Houston and Irving, Texas; in Chico, California; England and Norway; in New Orleans; and in Dallas, all where his father worked as a geophysicist. In fifth grade, likely 11 years old, David was quarterback of his youth tackle football team, which played for the Texas state championship in Irving's Texas Stadium, then home of the Dallas Cowboys. After graduating high school in New Orleans, David matriculated at University of Texas, Austin, and declared a dual-major. Midway in his first semester, a mental health crisis forced his withdrawal. David suffered from and struggled with mental illness for forty years. His basic optimism encouraged him, whenever able, to work, sometimes volunteering, sometimes being paid, for the improvement of society's understanding of mental illness. He worked with the Dallas Police Department on training for officers’ interaction with the mentally ill. He was interviewed by National Public Radio’s local affiliate, KERA regarding mental illness. He was a speaker at a National Alliance on Mental Illness National Convention, the largest community gathering of mental health advocates in the United States. David was a caring and humble individual. He appreciated all diversities; he was inclusive in his love of others. He is survived by his brother Paul Jon Mitchell of Dallas, and his half-brother Dennis Charles Mitchell, his son Zackary of Maryland, Other survivors include his uncle George Mitchell III, wife Genia; their children Danny Mitchell, Amy Mitchell, Andrea Wallace (husband Mark), and Dr. Kathleen Davis, (husband Johnny); six second cousins and other relatives in the Mitchell, Woods and Lusty families. David’s mother and father passed in 2006 and 2015. Funeral Services will be held 2:00 PM Saturday January 25, 2020 at Heritage Funeral Home in San Saba, Texas. The family will receive friends one hour prior to the service. Interment will follow at Wallace Creek Cemetery in San Saba, Texas In lieu of flowers or gifts, please donate to NAMI (National Alliance on Mental Illness), ACS (American Cancer Society), or the Alzheimer’s Association.

The family of David Dennis Mitchell Jr. created this Life Tributes page to make it easy to share your memories.

Send flowers to the Mitchell family.