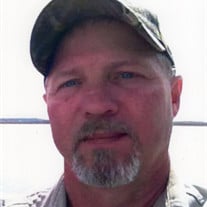 Danny Lee Crawford, age 58, of Brownwood, passed away Friday night at the Hendrick Medical Center, Brownwood. He was born January 18, 1963 in Brownwood, the son of Homer Dan and Oleta Faye (Graves) Crawford. He attended schools at Brownwood and worked as a roofer during his early years. He later worked for Brandt as a sheet metal fabricator for over 15 years. He was a certified welder and journeyman with the Union. He married Teresa Whiteley in Brownwood on September 10, 1983 and had lived in Brownwood most of his life. He loved to weld, do wood-work and build things. He will be remembered for always being willing to help others and for the love he had for family, especially the grandkids and nieces and nephews. He enjoyed fishing and camping and especially sitting by a fire. He is survived by his wife Teresa of Brownwood, a daughter, Kyla Crawford of Brownwood, two sons, Derek Crawford and Brandon Crawford both of Brownwood, three grandchildren, Bryleigh, Duley, and Maleigha Crawford, a brother, Larry Crawford of Bangs, his sister, Lisa Willett of Brownwood and two nephews, Jeremy and Jason Lawson. He was preceded in death by his parents and a sister, Bonnie. Funeral services will be held at 2:30 pm on Thursday, September 9, 2021 in the Davis-Morris Chapel of Heritage Funeral Home, Brownwood with visitation to be held from 6 – 8 PM on Wednesday evening. Burial will follow in the Cedar Point Cemetery. Funeral arrangements are entrusted to Heritage Funeral Home Davis-Morris Chapel of Brownwood. Please view Mr. Crawford's online memorial at www.heritagefuneralhomes.com

The family of Danny Lee Crawford created this Life Tributes page to make it easy to share your memories.

Send flowers to the Crawford family.