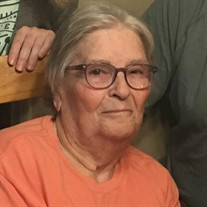 Bettie Faye Coffer, 85, formerly of Abilene and Houston, Texas passed away at the residence of her daughter in Lometa, Texas on January 12, 2022. Bettie was born on December 10, 1936, in Riesel, Texas to Sherman Joseph Dorris and Kizzie Ione Wilson Dorris. She was of the Baptist faith. During her life, Bettie had taken courses focused especially on childcare and subsequently operated a childcare facility in her own home. She had also owned and operated a locksmith shop, worked as a waitress, and was employed as a government inspector for the poultry industry. Bettie helped to raise the children of her brothers and sisters and was a devoted mother and grandmother. She and John D Coffer were married on October 8, 1955, in Elm Mott, Texas and he preceded her in death on May 15, 2016. Mrs. Coffer is survived by her son, John Coffer, and wife Carol of McGregor, three daughters and their husbands, Diane and Charlie Miller of Huffman, Dorothy and Roger Rodriguez of Lometa, and Joyce and Keith Doxey of Cold Spring. She is survived by eight grandchildren, John Charles Miller, Jason Miller, Jessica Richey, Justin Smith, John Smith, John Westley Coffer, Tripp Jones, and Kirk Doxey. She has been blessed with 19 great grandchildren and two great-great grandchildren. Bettie is preceded in death by her parents, her husband, three sisters, eight brothers and her aunt and uncle, Maude and Frank Parks. Bettie is also survived by numerous nieces and nephews. The graveside service for Mrs. Coffer will be on Saturday, January 15, 2022, at 11:00 AM at the Gholson Cemetery at 950 Wildcat Circle in Gholson, Texas, near Waco. Mr. Charlie Miller will officiate the service. The family has requested that if you would like to donate in Bettie’s memory, please do so to the American Heart Association or to the Gholson Cemetery Association at 840 Mary Ware Drive, Waco, Texas 76705. Pallbearers serving include John Charles Miller, Jason Miller, John Westley Coffer, Tripp Jones, Billy Waltmon and Ron Alexander. Arrangements are entrusted to Heritage Funeral Home of Lampasas

Bettie Faye Coffer, 85, formerly of Abilene and Houston, Texas passed away at the residence of her daughter in Lometa, Texas on January 12, 2022. Bettie was born on December 10, 1936, in Riesel, Texas to Sherman Joseph Dorris and Kizzie Ione... View Obituary & Service Information

The family of Bettie Faye Coffer created this Life Tributes page to make it easy to share your memories.

Send flowers to the Coffer family.