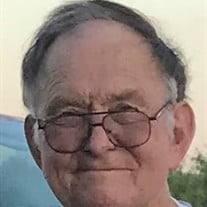 Barber "Bobby" Frank Hext passed away on July 23, 2021. He was born June 25, 1935, on stormy night in an old sheep herder's hut out on Old Nine Road. His mother, Margaret Elizabeth Oldham Hext, was canning corn at the time her labor started. His father, Barber Markley Hext, called for the doctor but the doctor wasn't able to make it because of the storm. His father assisted his wife in delivering Bobby to the world. Bobby was raised on a ranch on FM 1311. His first year of school was at the Calf Creek School before it closed down and all the students were transferred to Brady Schools. At a young age, he was diagnosed with Polio and spent some time in the old Brady Hospital. This is when a very nice nurse gave him something to do and taught him how to knit. Of course, he forgot how to knit quickly after leaving the hospital. His education continued in the Brady School System. In High School he played football in spite of his early polio where his cleats would terrorize opponents and teammates alike. Bobby worked at a gas station and didn't graduate from High School, but he did continue his education at Odessa College. On August 9, 1958, he married the love of his life, Sheryl Ann Zitelman. They lived in New Mexico for a few months before moving to Crane, Texas. While in Crane they had their first child, a son, Barber Fritz Hext. After a short time, they moved back to the ranch to help his parents. During this hectic time, they welcomed a daughter Elizabeth Ann Hext. While living and working on the ranch he would sometimes have to find additional work. He loved day work and he worked for Quinn Ranch and Bill Roddie Ranch just to name a few. He worked for a time at Loadcraft. Later he earned his CDL and was on the road for long stretches of time. Throughout the 1980's- 1990's, he drove for CX Trucking, Ed Davenport Trucking (over fifteen years) and Max Mahan Trucking. While working the ranch with his wife and driving, he helped raise two children, many grandchildren, and still always found the time to help out family, friends, and neighbors. Family was a big thing to Bobby. No matter how big the problem was or how bad the trouble, he would say, "that's family." Bobby never wanted you to end an argument or leave without first clearing the air. During the early years of his marriage to Sheryl Ann he became a Lutheran and was a member of the Mount Calvary Lutheran Church of Brady. He held a position as Elder for many years. Bobby taught his children and grandchildren good work ethics. When the sun was up, you started work, you took a break in the heat of the day and finished when the job was done (or if his wife said it was time to eat). Just because he had a day off from a paying job never meant that it was a day off from work around the ranch. Bobby is proceeded in death by his father, Barber Markley Hext, mother, Margaret Elizabeth Oldham Hext, brother Travis Lee Hext Sr., and his son Barber Fritz Hext. He is survived by his wife Sheryl Ann Hext, daughter Elizabeth Ann Hext Jackson and Jay Travis, four granddaughters, Beth Ann and Leon Williams of Brady, Bobbie Lynn Jackson of Rochelle, Brittany Louise and Brad Palmer of Loving, New Mexico, Brooke Marie Jackson of Fort Worth, Texas, honorary son and daughter Rev. Dr. Tim and Jo Rosenthal of Wichita Falls, Texas and children, his sisters Pasty Sue Faver of Brady, and Doris Hext Bounds of Myrtle Beach, North Carolina, eleven great-grandchildren and many nieces and nephews. Memorial Service for Bobby will be held at 2:00 PM Saturday, July 31, 2021, at Heritage Funeral Home of Brady with Rev. Dr. Timothy S. Rosenthal, former pastor and long-time family friend, officiating. His remains will be laid to rest on the ranch in a private family ceremony at a later date. Funeral arrangements are entrusted to Heritage Funeral Home of Brady. Please view Mr. Hext's online memorial at www.heritagefuneralhomes.com

Barber "Bobby" Frank Hext passed away on July 23, 2021. He was born June 25, 1935, on stormy night in an old sheep herder's hut out on Old Nine Road. His mother, Margaret Elizabeth Oldham Hext, was canning corn at the time her labor started.... View Obituary & Service Information

The family of Barber "Bobby" Frank Hext created this Life Tributes page to make it easy to share your memories.

Send flowers to the Hext family.