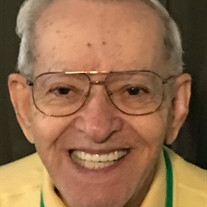 Assad (Sam) Nasr, 87, of Austin, Texas passed away on August 26, 2021 in San Angelo, Texas. Sam was born on January 15, 1934, in Najran, Syria, to Modalleh and Ali Nasr. As a child, he traveled from his village to attend school in Damascus. Due to his brilliance in academics, he was chosen to study abroad in the United States. He spent time in Chicago and attended college at the University of Texas at Austin and Texas A&I where he eventually received bachelors and masters degrees in Math and Engineering. He was supposed to return to Syria after college, but met the love of his life, Edith Ann Harrison, who worked at a diner near the university. They dated and were married on January 30th, 1962. Sam began a long career at the Lower Colorado River Authority as an Electrical Engineer where he remained for over 30 years. Sam will be remembered for many things including his love for repairing anything with a motor in it, lentils and rice with onions, lemon drops, Classical/Neil Diamond music, and duct tape. He also set an example in selflessness (always putting the needs of his family before his own). Sam is survived by his wife, Edith Nasr; his children, Johnnie [and Terry], Tim [and Krista], Joe, Sammy [and Kristen], Annetta [and Ryan]; and his 16 grandchildren (Devin, Kelsey, Seth, Alyson, Emma, Aric, Ajla, Rhea, Sebastian, Sarah, Hannah, Samuel, Abby, Rachel-Anne, Rebecca, and Joshua) and 1 great grandchild (Sleyton). The Visitation will be held at 6:00 pm on Sunday, August 29, 2021 at Heritage Funeral Home at 905 Bevans St, Menard, TX. Funeral services will be held at 11:00 am on Monday, August 30, 2021 at First Baptist Church on 301 Tipton St, Menard, TX. The burial will follow at Fort McKavett Cemetery concluding with a reception at the fellowship hall back at the Baptist church. Pallbearers at the funeral will be Tim, Sammy, Aric, Ryan, Terry and Devin. The family of Sam Nasr wishes to extend our sincere thanks to Menard Manor, The First Baptist Church and friends who have traveled here to celebrate his long and amazing life. Funeral arrangements are entrusted to Heritage Funeral Home of Menard. Please view Assad (Sam) Nasr's online memorial at www.heritagefuneralhomes.com

Assad (Sam) Nasr, 87, of Austin, Texas passed away on August 26, 2021 in San Angelo, Texas. Sam was born on January 15, 1934, in Najran, Syria, to Modalleh and Ali Nasr. As a child, he traveled from his village to attend school in Damascus.... View Obituary & Service Information

The family of Assad Ali Dareb Nasr created this Life Tributes page to make it easy to share your memories.

Send flowers to the Nasr family.