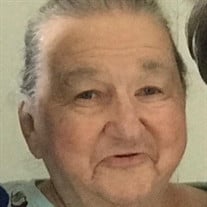 Ann Louise Biddy, 87, longtime resident of Lampasas, Texas passed away on February 28, 2022, at Lily Springs Nursing and Rehabilitation Center in Lampasas. She was born on July 18, 1934, in El Paso, Texas to Douglas and Alpha Louise (Kurtz) Hollaman. She and Billy Ray Biddy married in 1953 in Abilene. She was a devoted homemaker, mother, grandmother, and great grandmother. Ann loved to bake, everyone loved her. She was a member of the San Saba Baptist Church. Mrs. Biddy is survived by four daughters, Debra Witcher and husband Ronnie, Sheila Maceyra, Peggy Brown, and husband Gary, all of Lampasas and Karen Tena of Belton, four sons, Gary Hollaman of Lampasas, Billy Ray Biddy, Jr. and wife Brenda of Johnson City, Texas, Jad Smith and wife Stephanie of Tulsa, Oklahoma, and Joel Smith and wife Michelle of Fort Worth, and two sisters, Janet Cluff of Arizona and Eleanor Shoenburg of Phoenix, Arizona. She has 20 grandchildren, seven step-grandchildren, 23 great grandchildren and 8 great-great grandchildren. Ann is preceded in death by her parents, her husband, two daughters, Darlene Mabrey and Becky Whitehead and one son, Keith Biddy. The visitation will be from 5-7 PM on Friday, March 11, 2022, at Heritage Funeral Home in Lampasas. The funeral service will be at 10:00 AM on Saturday, March 12 at Heritage Funeral Home with burial to follow at Oak Hill Cemetery in Lampasas. Brother Red Watson will officiate the service. Memorial donations may be made to the American Cancer Society in Mrs. Biddy’s memory. If you are unable to attend the funeral, go to heritagefuneraltx.com and select Mrs. Biddy’s tribute, a livestream will be available. Arrangements are entrusted to Heritage Funeral Home of Lampasas.

Ann Louise Biddy, 87, longtime resident of Lampasas, Texas passed away on February 28, 2022, at Lily Springs Nursing and Rehabilitation Center in Lampasas. She was born on July 18, 1934, in El Paso, Texas to Douglas and Alpha Louise (Kurtz)... View Obituary & Service Information

The family of Ann Louise Biddy created this Life Tributes page to make it easy to share your memories.

Send flowers to the Biddy family.