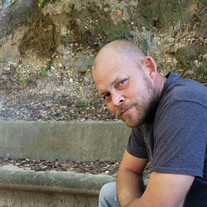 Zachariah Gray Schmidt was received into the loving arms of the Lord on April 28, 2022, at the age of 42. Zach was born January 16, 1980, to Ronnie and Lisa Gray Schmidt in Austin, Texas. He spent a good portion of his life growing up there - a place to which he would always find himself returning. He was a beloved father of Jaxon Gray Schmidt and Sebastian Gray Schmidt. He enjoyed getting to spend time with them and passing on the many talents he was known for. He was an avid fisherman and hunter who enjoyed spending time on the water, as well as in the woods. As a child, having access to open range and the beautiful Cherokee Creek on a ranch he could never get enough of, he honed his skills to become the master he was. He took very little and was able to provide a bountiful harvest. This talent was a great attribute. All he would need was string, a hook and some time, or "just one bullet". The rewards he reaped were endless, and he loved being able to take care of the ones he loved most. Of all the hobbies he enjoyed other than hunting and fishing, cooking was one of his favorites! He spent time watching cooking shows and learning recipes that he would put a twist on and perfect in his own way. He was a natural born landscaper, a talent to which he was noticeably recognized. He helped create many beautiful landscaping projects around Travis County. Some include Town Lake Park in downtown Austin, Rough Hollow in Lakeway, and Bergstrom International Airport, to name a few. His skill set when it came to digging trees and wrapping them by hand was unmatched. Working with his father in their tree yard, he could turn out loads of big rigs filled with trees to be delivered for landscaping jobs all over Texas. He is survived by his parents, Lisa & Ronnie Schmidt of Cherokee, Texas. Two sons, Jaxon and Sebastian Schmidt. A grandmother, Elizabeth Gray Johnson of Mission, Texas. One aunt, Martha McDoniel of San Saba, Texas. A cousin, Billy Cawthon of Houston, Texas, who was more like a brother to him and someone who holds many fond and loving memories of their time together; a loving girlfriend, Darlene Sanders, of New Braunfels, Texas, who has many loving memories to cherish from their time together; as well as extended family and many friends he met along the way who will remember him as a light in their life and the "life of the party". He is preceded in death by his grandfather, Billy Charles (B.C.) McDoniel and an uncle, James Raymond McDoniel, better known as "Jim" or "Jami." John 14:1-3; Do not let your hearts be troubled. You believe in God; believe also in me. My Father's house has many rooms; if that were not so, would I have told you that I am going there to prepare a place for you? And if I go and prepare a place for you, I will come back and take you to be with me that you also may be where I am. Psalm 73:26; My flesh and my heart may fail, but God is the strength of my heart and my portion forever. Romans 8:28; And we know that in all things God works for the good of those who love him, who have been called according to his purpose. Romans 8:38-39; For I am convinced that neither death nor life, neither angels nor demons, neither the present nor the future, nor any powers, neither height nor depth, nor anything else in all creation, will be able to separate us from the love of God that is in Christ Jesus our Lord.

Zachariah Gray Schmidt was received into the loving arms of the Lord on April 28, 2022, at the age of 42. Zach was born January 16, 1980, to Ronnie and Lisa Gray Schmidt in Austin, Texas. He spent a good portion of his life growing up there... View Obituary & Service Information

The family of Zachariah Gray Schmidt created this Life Tributes page to make it easy to share your memories.

Zachariah Gray Schmidt was received into the loving arms of the...

Send flowers to the Schmidt family.