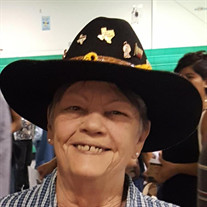 Wilma Sue Sargent, 70, longtime resident of Briggs, Texas, passed away on October 3, 2021, in Lampasas, Texas. Wilma was born on January 7, 1951, in Pikeville, Kentucky, to Herman Haynes and Anna McPeeks Haynes. She and Randy Sargent married on August 18, 1967, in Pasadena, Texas. Wilma was a lifetime member of the VFW Ladies Auxiliary. Her favorite hobby was rock and fossil collecting. She loved to play games with her family. Wilma is survived by her daughter Tania Procter and husband Darran of Briggs, and son in law, Joseph Williams of Briggs. She was blessed by five grandchildren, Reagan Tucker, Sfrona Procter, Isaiah Williams, Matthew Williams and Knoxon Procter and one great grandson, Miles Tucker. Mrs. Sargent is preceded in death by her parents, her husband Randy Sargent in December of 2015, one daughter, Susan Sargent, two brothers and one sister. There will be a service for Mrs. Sargent at 10:00 AM on Tuesday, October 12, 2021, at the Central Texas Veterans Cemetery in Killeen. Honorary pallbearers will be Darran Procter, Joseph Williams, Daniel Hale, Isaiah Williams, Matthew Williams, and Knoxon Procter. Arrangements are entrusted to Heritage Funeral Home of Lampasas.

The family of Wilma Sue Sargent created this Life Tributes page to make it easy to share your memories.

Send flowers to the Sargent family.