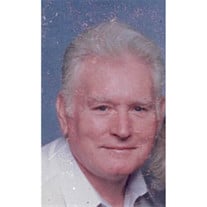 Willis B. Hall, 75, of Rochelle, Texas went to his eternal home on Sunday, May 19, 2019 in Brady, Texas surrounded by his family. Willis was born in Verona, Texas on August 29, 1943 to Denver Hall and Oleta (Maughan) Hall. On November 2, 1961, Willis married the love of his life, Lynda Ingram, at the Princeton Parsonage in Princeton, Texas. They cherished 57 wonderful years together and two precious children, Robby and Jon. Willis enjoyed hunting, fishing, camping and gardening. He adored his children and grandchildren and his family was the center of his world. Willis was a faithful man and devoted his life to the Lord. Willis worked 30 years with Western Electric, later known as South Western Bell and then AT&T. At retirement, Willis and Lynda moved to the Heart of Texas which became HOME. He was a member of Rochelle Baptist Church and on April 21, 2013 became an Ordained Deacon. He was a lifelong member of the National Rifle Association. Willis had several co-workers and friends. He was a loving father and PaPa who loved the meaning of family. He loved to tease especially after he got to know them. Willis will be missed but he is at peace with his Lord, our Savior. Those left to cherish Willis B. Hall's memory are his beloved wife, Lynda (Ingram) Hall of Rochelle; two sons, Robby Hall and wife Lynda of Kettle Falls, Washington, Jon Hall and wife, Jamey of Wolfe City; brother, Fred Hall Sr. and wife Stella of McKinney; four grandchildren, Justin, Josh, Chris, Jacee; two step grandchildren Onome and Karo; and numerous great grandchildren, nieces, nephews, and friends. Willis B. Hall is preceded in death by his parents, father and mother in law, four brothers, grandson, Jeremy and four sister in laws. Graveside Services for Willis B Hall will be held at the Cowboy Cemetery in Placid, Texas on Friday, May 24, 2019 at 10:00am with Morris Johnson officiating. Visitation will be held Thursday, May 23, 2019 from 6:00 to 8:00pm at Heritage Funeral Home. In lieu of flowers, Willis B. Hall's family request memorials be made to the Rochelle Baptist Church, McCulloch County Helping Hands or to a charity of your choice.

The family of Willis B Hall created this Life Tributes page to make it easy to share your memories.

Send flowers to the Hall family.