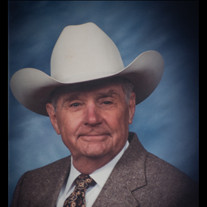 William Roy Jacoby passed away on June 25, 2021, in Menard, Texas. Roy was born on July 9, 1927, in Schleicher County, Texas. His parents were Tom and Letha Menzies Jacoby. Roy, along with his twin brother Ray and younger brother Philip, spent his first 16 years on ranches in Schleicher County and then they moved to Telegraph, Texas, in Kimble Count. He graduated from Junction High School in 1945, and he and Ray joined the Navy as soon as they graduated. They had just finished basic training when WWII ended. Roy spent the rest of his enlistment moth-balling ships. When Roy's enlistment was up, he came home to Kimble County to take up ranching again. On June 16, 1950, he married Ann Bannowsky. They just celebrated 71 years together. In January 1952 they moved to the ranch in Menard County, which they made their home for the next 70 years. Roy was a leader in the sheep and goat industry and served on many boards during his lifetime. He was on the Menard ISD Board, President of the Menard County ASCS for 30 years. He was President of the Menard NRCS Board, and was a Director of the Texas Sheep and Goat Raisers Association. He served as Chairman of the Texas State ASCS Board. He also served for many years as Director of Menard National Bank. Roy was preceded in death by his parents, twin brother Ray Jacoby and brother Philip Jacoby. He is survived by his wife, Ann, daughters, Jane Porter, Nancy Jacoby and Letha and Andy Gonzales, and son Jamie Roy and Dana Jacoby, all of Menard County. Grandchildren Jess and Marsha Porter, Coby and Lauren Porter, Kevin, Andre' and Leese Ann Gonzales and Ian Jacoby. He is also survived by nine great-grandchildren and numerous nieces, nephews and cousins. Roy was a member of the Menard Church of Christ where he served as an Elder. Memorials can be made to the Menard County 4-H Club, the Menard Volunteer Fire Department or the charity of your choice. Funeral arrangements are entrusted to Heritage Funeral Home of Menard. Please view Mr. Jacoby's online memorial at www.heritagefuneralhomes.com

William Roy Jacoby passed away on June 25, 2021, in Menard, Texas. Roy was born on July 9, 1927, in Schleicher County, Texas. His parents were Tom and Letha Menzies Jacoby. Roy, along with his twin brother Ray and younger brother Philip, spent... View Obituary & Service Information

The family of William Roy Jacoby created this Life Tributes page to make it easy to share your memories.

Send flowers to the Jacoby family.