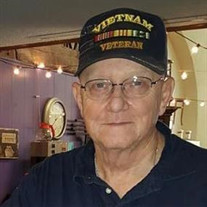 William “Bill” Charles Hall, 71, of Lampasas, Texas passed away at his residence on September 21, 2021. He was born on January 5, 1950, in Watseka, Illinois to Eldon Hall and Eunice Cook Hall. Mr. Hall came to Lampasas in 1985 from Colorado. He was a member of New Covenant Church in Lampasas. Mr. Hall was a retired firefighter. In Colorado, he had served in fire and mountain rescue, and was a firefighter at the Fort Carson Military Base. He had been a member of the volunteer fire departments in Lampasas and Security, Colorado. At Fort Hood, Bill trained firefighters, and he retired from there as a Station Chief. Mr. Hall proudly served two tours of duty In Vietnam. He was a Chinook helicopter mechanic. He earned a purple heart in Vietnam and survived several helicopter crashes. During his life, Mr. Hall had also been a prison guard in Terra Haute, Indiana and in Englewood, Colorado, and, after retirement, worked security for the oil fields on the Texas border, was a truck driver and worked at Star Propane. During his time in Lampasas, Bill stayed busy coaching softball, and was a member of the Little League Board. He also worked maintenance for LISD on his days off. Bill loved to fish, make native American jewelry and dreamcatchers, and he loved Harley Davidson motorcycles, having enjoyed riding several over the years. Bill is survived by his three sons, William Hall, Jr., of Sheldon, Illinois, Chad Hall and wife Wendi of Noblesville, Indiana, and Cory Hall and wife Damie of Lampasas, his daughter, Tonya Blair, and husband Henry of Lampasas, two sisters, Donna Webb of Clifton, Illinois and Lory Hall of Milford, Illinois, and by his former wife and dear friend, Vanessa Lehnig Hall. Bill is blessed by nine grandchildren, Caleb Hall and wife Kara, Cassi Hall, Alyssa Hall, Kinzee Hall, Slade Hall, Liam Hall, Jett Hall, Ethan Blair, and Noah Blair, and by one great grandchild, Cameron Hall. He is preceded in death by his parents. There will be a visitation on Sunday, September 26, 2021, at Heritage Funeral Home in Lampasas from 5:00-7:00 PM. The funeral service will be held at 11:00 AM on Monday, September 27, 2021, at New Covenant Church in Lampasas, with Darrell Feemster officiating. Pallbearers serving will be Mat Hall, Henry Blair, Shane Begley, Caleb Hall, Cory Hall, and Chad Hall. Burial will take place on Thursday, September 30, 2021, at Central Texas Veterans Cemetery in Killeen, Texas with military honors. Arrangements are entrusted to Heritage Funeral Home of Lampasas.

The family of William Charles Hall created this Life Tributes page to make it easy to share your memories.

Send flowers to the Hall family.