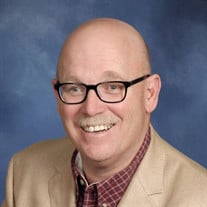 Willard “Pops” Wagner, 65, of San Angelo, Texas passed away on Friday, January 1, 2021 at his home surrounded by his family. He was born January 1, 1956 in San Antonio, Texas to Ennis Ray and Barbara Ann (Frazier) Wagner. After his father’s retirement from the Army, their family made their home in Menard, Texas. Willard married Xiomara Brumley on October 6, 1999 in San Angelo, Texas. After spending many years in Menard, Willard and Xiomara recently relocated to San Angelo. Willard was known for his strong work ethic and dedication. He was the Health Service Administrator for twenty-three years at the correctional facility in Eden, Texas. He also worked at Concho County Hospital for twenty-seven years with the last five years being as the Director of Nursing. Being known for working multiple jobs at once, Willard also spent the last three years working as an EMT for Eden EMS. Health care was his passion, but not as much so as his grandchildren were. Pops enjoyed taking all six grandchildren camping, fishing, and simply being outdoors. He also was an avid San Antonio Spurs fan and loved playing basketball all his life. Willard is preceded in death by his parents and his uncles, Dwight Waggoner, Stanley Frazier and Eugene Frazier. He is survived by his wife, Xiomara Wagner; daughter, Heather Garza and husband, Daniel of San Angelo; sons, Tyler Wagner and wife Kayla of Menard, Michael Brumley and wife Stephanie of Fort Worth, and Matthew Delgado of San Angelo; brothers, Clay Wagner of Bangs and Ray Wagner of Brady; grandchildren Wesley, Morgan, Mackenzie, Hunter, Tate and Maximus. Visitation will be held at 5 pm Wednesday, January 6 with the Rosary at 6 pm at Heritage Funeral Home Chapel in Menard. Church service will be held at 10 am Thursday, January 7 at Sacred Heart Catholic Church with Father Albert Ezeanya officiating. Burial will be following at Rest Haven Cemetery in Menard. Pallbearers are Wesley Wagner, Tate Wagner, Hunter Brumley, Maximus Brumley, Guy Waggoner, Nick Waggoner, Richard Fiveash, and Brent Frazier. Honorary pallbearers are Sidney Frazier and John Brumley Sr. The family would like to extend our sincerest thanks to St. Gabriel’s Hospice, Dr. Anderton and Dr. Richeh. Funeral arrangements are entrusted to Heritage Funeral Home of Menard.

The family of Willard Newton Wagner created this Life Tributes page to make it easy to share your memories.

Send flowers to the Wagner family.