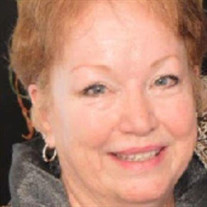 Vickie Gail Swindall was born June 22, 1950, and she went to be with the Lord on December 11, 2021. Gail was born in Concord, North Carolina to Luther Alvin Curd, Jr. and Dorothy Irene Ray Curd. Gail had three brothers: Steve, Ricky, and Tony. She also had one sister, Kristi. Gail met her husband Jim Frank while he was stationed in the army at Fort Gordon in Augusta, Georgia. They were married on March 12, 1971. After getting married, they moved to Jim Frank's hometown of Menard. They lived in Menard for a few years and then, for work, they moved to Austin where their daughter Amy was born. Then, two years later, they were then living in Midland where their son, Cody, was born. Gail worked many years for Drs. Nunnally, Freeman and Owens of Marble Falls, Texas. She retired this past November. Gail loved her work family. Gail was a member of the Menard Church of Christ her entire life. Her church family was very near to her heart. Family was the most important thing to Gail. especially her grandson Tanner. Tanner was his Grani Gail's heart and joy. Gail's favorite thing to do was watch Tanner play baseball, except when he was pitcher (it was too scary for her). It was no secret that he was her favorite person! Gail touched many lives. She was always willing to give advice and sometimes even if she wasn't asked!! Gail was preceded in death by her parents and her older brother, Steve. She is survived by her husband Jim Frank, daughter Amy & son-in-law Chad Hahn of Fort McKavett, Grandson Tanner Hahn of Fort McKavett, son Cody & daughter-in-law Cherry Swindall of Menard, step- granddaughter Aressa Branaman of Mason, step-great grandson Ezra Dunn, step-grandson Dalton Walker and wife Kaci of San Angelo, two younger brothers Ricky & wife Jennifer Curd, and Tony and wife Susan Curd of Georgia and little sister Kristi and husband Mike Capper of Georgia, and numerous nephews and nieces. Honorary Pallbearers are Tanner Hahn, Curt Hahn, Jake Swindall, Kirk Swindall, Dalton Walker, Cody Swindall and Chad Hahn. The family would like to thank Hospice of San Angelo with a special thank you to Mom's nurse, Chris. Memorial Services will be held at 11:00 am, Saturday, December 18, 2021, at the Menard Church of Christ 305 Gay Street Menard, Texas 76859.

Vickie Gail Swindall was born June 22, 1950, and she went to be with the Lord on December 11, 2021. Gail was born in Concord, North Carolina to Luther Alvin Curd, Jr. and Dorothy Irene Ray Curd. Gail had three brothers: Steve, Ricky, and Tony.... View Obituary & Service Information

The family of Ms Vickie Gail Swindall created this Life Tributes page to make it easy to share your memories.

Send flowers to the Swindall family.