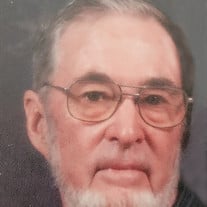 Vernon Brice Wagner was born August 26, 1934 in Post, Texas to Leonard Vernon Wagner and Movelda Aquilla Brooks Wagner. Mr Wagner was surrounded by his family when he took his place in heaven on November 14, 2021 in Lakeway Hospital after fighting a lengthy battle of complications with health issues. Brice was a successful family and businessman. On April 20, 1972, he married the love of his life, Marjorie Helen Hill, of Richland Springs, Texas. They started their lives together in Brownfield, Texas, farming and ginning their own cotton, and later added a Whites Home and Auto store, and Case Tractor and Equipment business. In 1979 he took an overseas job and his family to Venezuela, where he retired after 11 years as a drilling superintendent, and relocated to the San Saba area. He would always put his faith in the Lord first in his life, and contributed his success in business and other areas of his life to God . He knew no stranger and missed no opportunity to share God's word with all who crossed his path. His favorite ending to any conversation was, "I'll see you here, there, or in the air." He was a man after God's own heart and that is why he was loved so dearly by so many. He was preceded in death by his parents, a son Ricky Wagner, daughter Toni Pounds Wagner, great-granddaughter Madison Colburn, great-grandson Shawn Marfell, sister Maureen Smith, and son-in-law Jim Phillips. He is survived by the love of his life, Marjorie Wagner; children, Butch Wagner and wife Kaye, Cheryl Phillips, Gena Colburn, Vickie Figueroa and husband Eugene, Victor Hill, K.C Hill and wife Terri, and Misti Wagner; 20 grandchildren and 29 great-grandchildren. A Memorial service will be held on December 7, 2021 at 2:00 PM at Heritage Funeral Home in San Saba. Please view Mr. Wagner's online memorial at www.heritagefuneralhomes.com.

Vernon Brice Wagner was born August 26, 1934 in Post, Texas to Leonard Vernon Wagner and Movelda Aquilla Brooks Wagner. Mr Wagner was surrounded by his family when he took his place in heaven on November 14, 2021 in Lakeway Hospital after fighting... View Obituary & Service Information

The family of Mr Vernon Wagner created this Life Tributes page to make it easy to share your memories.

Send flowers to the Wagner family.