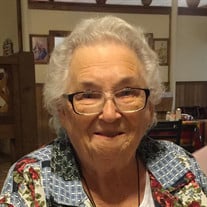 Sylvia Daw Hamilton, 84, of Brady, Texas passed away on March 8, 2021 in San Angelo, Texas. She was born on October 3, 1936 in Swearingen, Texas to A.J. King and Velma Chase King. Sylvia, better known as June, was raised in the Swearingen Community of Cottle County and graduated from Paducah High School in 1955. After graduating, she moved to the Dallas area where she was employed by Southwestern Bell Telephone. She returned to Paducah and married E.W. (Mutt) Hamilton on May 7, 1973. She was a member of the First Baptist Church of Paducah. June moved to Brady, Texas in the early 2000’s where she enjoyed being close to her family, especially her grandchildren and great-grandchildren. June spent her entire life in service to others. After returning to Paducah, June was employed as a nurse’s aide and Activity Director at Richard’s Memorial Hospital and the Paducah Covalescent Center before semi-retiring and taking up private sitting. She loved serving her patients and everyone she worked with and always treated everyone like family. She was preceded in death by her beloved husband, E.W. Hamilton in 1991;brother, A.J. King; two daughters, Neva Kay Yates in 2013, and Sarah Couvillion in 2018. Survivors include three sons, Gary Couvillion and wife, Brenda of Brady, Alfred Couvillion and wife, Martha of Waco, and Bill Hamilton and wife, Patsy of Lubbock; nine grandchildren, Brandon Couvillion and wife, LeAnndra of Mason, Kaleb Couvillion and wife, Shelbie of Mason, Jeremy Couvillion and wife, Melanie of Mason, and Chance Couvillion and wife, Jolie of Weatherford, Demirick Couvillion and wife, Rosa of Hubbard, Javier Vela and Joseph Castillo of Waco, Cameron Couvillion of Dexter, MO, and Kirsten Couvillion of Chandler, Arizona; and nineteen great-grandchildren. The family will receive friends on Wednesday, March 10, 2021 from 6:00 to 7:30 PM at Heritage Funeral Home in Brady. Graveside service will be held on Thursday, March 11, 2021 at 2:00 PM at Rest Haven Cemetery in Brady. Pallbearers include Jeremy Couvillion, Chance Couvillion, Kaleb Couvillion, Demirick Couvillion, Javier Vela, and Joseph Castillo. Honorary Pallbearers include Brandon Couvillion, Cutter Couvillion, and Ethan Couvillion. Funeral arrangements are entrusted to Heritage Funeral Home of Brady.

Sylvia Daw Hamilton, 84, of Brady, Texas passed away on March 8, 2021 in San Angelo, Texas. She was born on October 3, 1936 in Swearingen, Texas to A.J. King and Velma Chase King. Sylvia, better known as June, was raised in the Swearingen Community... View Obituary & Service Information

The family of Sylvia Daw Hamilton created this Life Tributes page to make it easy to share your memories.

Sylvia Daw Hamilton, 84, of Brady, Texas passed away on March...

Send flowers to the Hamilton family.