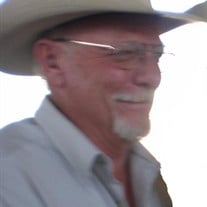 Russell S. Willis, age 72, passed from this life on Thursday, April 14, 2022 in Brady. Russell was born on April 30, 1949 in Artesia, New Mexico to Harvey Townsend Willis and Mary Elizabeth (Hogan) Willis. He had lived in Brady most of his life before moving to Ft. Stockton where he lived until returning six years ago to make Brady his home again. Russell married Linda Cates on February 3, 1968 in the Rochelle Baptist Church in Rochelle, Texas and they had three daughters together. He was the life of the party, and there was never a dull moment. He was witty and loved telling jokes and making people laugh whenever and wherever he could. He had a deep love of music, especially classic country when it involved Jerry Jeff Walker, Tom T. Hall, Willie Nelson and the good ole' boys from back in the day . He also loved to sing and play guitar. Russell was a jack of all trades. He had a love of training bird dogs where he earned several awards. He also had a deep love for the Dallas Cowboys and the Aggies. He was a loving father, grandfather and great-grandfather. Russell was preceded in death by his parents Harvey and Mary Elizabeth Willis, and his sister Joyce Teague. Left behind to cherish his memory are his three daughters, Tracey Poe and husband Jud of Grandbury, Texas, Lisa Moreno and husband Gabe of Brady, and Tina Willis of Jarrell, Texas; grandchildren, Tiffany Williams and spouse Casey Simon, Lonnie Williams and spouse Whitney Inlow, Tessa Moreno, Emily Moreno, Gabby Moreno, Alyssa Bell, Jaden Poe and Hailey Bell; two great-grandchildren, Ryder Simon and Presley Williams; and several extended family and friends. Visitation will be held from 5:30 to 7:30 PM on Wednesday, April 20, 2022 at Heritage Funeral Home in Brady. Funeral services will be held at 1:00 PM on Thursday, April 21, 2022 at the Heritage Funeral Home Chapel with Rudy Rule and Joe Johnson officiating. Burial will follow in Rest Haven Cemetery in Brady. In honor of Russell's deep love of Texas A&M, all maroon or Aggie apparel is welcomed. Funeral arrangements are entrusted to Heritage Funeral Home of Brady. Please view Mr. Willis' online memorial at www.heritagefuneralhomes.com

Russell S. Willis, age 72, passed from this life on Thursday, April 14, 2022 in Brady. Russell was born on April 30, 1949 in Artesia, New Mexico to Harvey Townsend Willis and Mary Elizabeth (Hogan) Willis. He had lived in Brady most of his... View Obituary & Service Information

The family of Russell Willis created this Life Tributes page to make it easy to share your memories.

Russell S. Willis, age 72, passed from this life on Thursday,...

Send flowers to the Willis family.