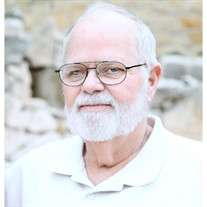 Ronnie Frank Sloan, 70, of San Angelo, Texas, formerly of Brady, passed away on Sunday, September 16, 2012, in San Angelo, Texas. Visitation will be Tuesday, September 18, 2012, from 5:00 to 7:00 pm at Heritage Funeral Home. Funeral Services will be held at 3:00 p.m. on Wednesday, September 19, 2012, at St. Paul's Episcopal Church in Brady with burial at Baby Head Cemetery in Cherokee, Texas. Ronnie was born in San Saba, Texas on June 17, 1942, to Frank Sloan Jr. and Reedie (Smith) Sloan. He married Judy Evans on August 25, 1963 in Gardena, CA. From 1970 to 1972 Ronnie was a part owner of Sloan's Grocery Store in San Saba. In 1972, he opened a Sloan's Grocery in Brady and ran it until he sold out in 1983. After the sale of the store, he drove a truck for Max Mahan until finally retiring in 1987. He had lived in San Angelo since 1990. He was a member of St. Paul's Episcopal Church. Ronnie enjoyed fishing and loved a good game of poker. It was not unusual for him to pack his motor home and take off for several days at a time to try his luck in the casinos; hitting as many as possible each trip. He was preceded in death by his parents. Survivors include; wife, Judy Sloan of San Angelo; daughter Mona Sloan of Comanche, Tx; granddaughter; Sloan Cortez of San Angelo; brother; Randall Sloan, and wife Brenda, of Eden; sister; Brenda Lane of Ft Worth; uncle; Don Sloan, and wife Gail, of San Saba; numerous nieces and nephews. Please visit Mr. Sloan's online memorial at www.heritagefuneraltx.com

The family of Ronnie Frank Sloan created this Life Tributes page to make it easy to share your memories.

Send flowers to the Sloan family.