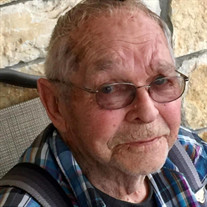 Roger Neal Barrows, Sr., 86 of Marathon, born June 3, 1934 in Cortland, NY to Clifford Barrows & Mona (Willis) Barrows, passed away March 3, 2021 peacefully at his son’s home in Brady, Texas, with his wife Marion, youngest son Randy and his wife, Debbie by his side. He grew up in Virgil & Freetown. After graduating from Marathon Central School he enlisted in the U.S. Marine Corp at 17 years of age (1952). While in the service he fought in the Korean war and was honorably discharged June 9, 1955. He returned home and married the love of his life, Marion Merihew, October 25, 1958. They began farming and had 3 children of their own. Roger Jr, Pennie and Randy. Roger & Marion had dairy farms & he also worked out away from home for the City of Cinninnatus, Town of Taylor, Round House Mills, and later had his own business – Barrow & Sons. In 1989, after having a heart bypass surgery, he retired. During retirement he enjoyed many things such as resotring Farmall Tractors, fishing, drinking coffee with many friends and spending time with his family. Roger is survived by Marion, his wife of 62 years: son Roger Barrows, Jr & Paula from Oxford, NY. Pennie Winkler & husband Barry from Laurenceville, GA. Randy Barrows & wife Debbie from Brady, TX. Grandchildren: Cassie Barrows (Mark Benedict), Kari Barrows (Eric Bremer), Catherine Barrows (Colin McLaughlin), Gabrielle Barrows, Joshua Barrows (Monica Wilson), Alexandra Barrows, Chris Aloi & wife Toni, Joey Stone & wife Jordan, Amanda Sifers & husband Brandon, Kaylea & husband Nicholas. 14 great -grandchildren, and many nieces and nephews. Roger was preceded in death by his father, mother & two brothers, Roy & Bobby Barrows. In lieu of flowers, the family requests donations be made to a medical fund that is set up at the Brady National Bank, PO Box 111, Brady, TX 76825 (Payable to Marion Barrows). At this time there is no services scheduled but family would like to invite everyone in celebrating Roger’s life at a Memorial that will be held in Marathon, NY in early summer. Cards and encouragements can be mailed to Marion at 331 County Road 162, Brady, TX 76825.

The family of Roger Neal Barrows Sr. created this Life Tributes page to make it easy to share your memories.

Send flowers to the Barrows family.