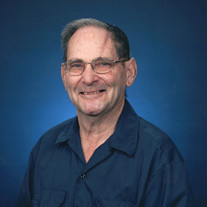 Rogell Herman Crawford, age 86, of Brownwood, passed away at his home on Saturday, March 26, 2022. He was born October 3, 1935, in Olden, Texas, the son of Robert Hershel Crawford and Evelyn Oma (Johnson) Crawford. He was raised in West Texas and after graduating from high school, he served in the U. S. Army. He married Della Ann Beaver in Kerrville, Texas on August 26, 1961. He worked for several grocery stores as a grocery clerk including Fiesta Foods and Spruill Grocery in West Texas. He also was a distributor for Del Tex Candy Company, Guy's Potato Chips, and Meads Bread. He had been a resident of Brownwood for the past twenty-five years. His hobbies included collecting auto license plates, elephant knick-nacks, soda pop bottles. He had a love for antique cars and was a member of the Big Spring Antique Auto Club and the Brownwood Antique Car Club. He enjoyed eating chocolate, watching Gunsmoke on television, old country music, and especially being with his family. He was a member of Grace Baptist Church. He is survived by his wife, Della Crawford, two sons, Mark Crawford of Gainsville, Arkansas, and Neil Crawford of Portland, Oregon, a daughter, Karen Leaver of Gatesville, Texas, grandchildren, Brandon Crawford, Crystal White, Tesia Silquero, Gregory Crawford, Audrea Crawford, Laurelee Curtis, Morgan Curtis, Courtney Bishop. and Krystal Spiegle. Six great-grandchildren also survive. Funeral services will be held at 9:30 am Wednesday, March 30, in the Davis-Morris Chapel of Heritage Funeral Home with Pastor Phillip Scott of Grace Baptist Church in Early officiating. Burial will follow in the Howard Cemetery near Desdemona, Texas. Visitation will be held on Tuesday evening from 6 - 8 at the funeral home. Services have been entrusted to the care of Heritage Funeral Home, Davis-Morris Chapel. Friends and family are encouraged to view the online memorial at www.heritagefuneraltx.com.

Rogell Herman Crawford, age 86, of Brownwood, passed away at his home on Saturday, March 26, 2022. He was born October 3, 1935, in Olden, Texas, the son of Robert Hershel Crawford and Evelyn Oma (Johnson) Crawford. He was raised in West Texas... View Obituary & Service Information

The family of Rogell Herman Crawford created this Life Tributes page to make it easy to share your memories.

Rogell Herman Crawford, age 86, of Brownwood, passed away at...

Send flowers to the Crawford family.