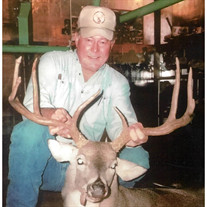 Robert Glen Sydow, 82 of Pontotoc Texas, went to his Heavenly Home on Sunday, January 5th, 2020. Graveside service will be held on Saturday, January 11th, 2020 at 12pm at Pontotoc Cemetery. Robert was born August 13th, 1937 in Mart, Texas outside Waco to Marvin and Gladyce (Barnhart) Sydow. He graduated from La Vega High School in 1955 and after a stint in the Army Reserves relocated to Houston Texas, where he met his future wife Lucille (Kacal) Sydow. Robert started SK Industries which became a successful machine shop that still operates today. An avid hunter and fisherman, he purchased what would become the Sydow Ranch in 1978. He would spend the majority of his golden years there. Robert was an honorary member of the Cypress VFW. He loved children, and supported many FFA organizations over the years. He also enjoyed hosting The Cherokee Home for Children where foster kids would have guided hunts. In his final days, he was at peace on the ranch with the love of his life Lucy, who he affectionately called his "Wose" and his loyal companion Buck a labrador, and being surrounded by family and friends. Robert is survived by wife Lucille, sister Joy Robinson of Dallas, Texas, daughter Deborah (Sydow) Jennings and husband Wayland of Lampasas Texas, son David Sydow and wife Heather of Houston, Texas. Grandchildren Chris Schielack and wife Laina, Jenny(Sydow) Campise and husband Matt, JR Sydow and wife Kristen, Zach, Brooklyn, and Kayla Sydow, Cheyenne Lynch. Along with 6 great grandchildren. Robert is preceded in death by his parents and sister Nancy "Marvina" Jarvis. Serving as pallbearers are Chris Schielack, JR Sydow, Matt Campise, TJ Webster, Frosty Miller, and Roger Kasper. Honorary pallbearers are Charlie Hale and Gary Kasprzyk. In lieu of flowers, please make a donation to Shriner's Children's Hospital web address shrinershospitalforchildren.org A luncheon will be held at the Pontotoc Community Center after the services.

The family of Robert Glen Sydow created this Life Tributes page to make it easy to share your memories.

Robert Glen Sydow, 82 of Pontotoc Texas, went to his Heavenly...

Send flowers to the Sydow family.