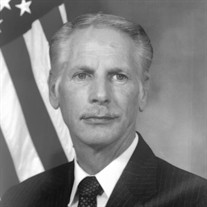 Mr. Robert Strange, 77, of Copperas Cove, Texas died at his residence on Sunday, June 13, 2021. Robert was born on Sunday, April 9, 1944, in Fort Bragg, North Carolina to Harold James and Loretta E. (Spanbauer) Strange. He moved to Copperas Cove in 1991 from Fort Rucker, Alabama. He married Nancy Balcom on July 26, 1966, in Dale County, Alabama. He joined the US Army at Louisville, Kentucky in 1961 at the age of seventeen. He served twice in Germany, twice at Fort Rucker, and at Fort Eustis in Virginia. He then served in Korea, and two tours of duty in Vietnam. Robert then was a civilian contractor at Fort Hood, Texas at OTC, and the Aviation Board. He retired from the military and then from civil service ten years ago. Robert was preceded in death by his parents. His survivors include his wife, Nancy Strange of Copperas Cove, two sons, Dion Strange (Sara) of Gatesville, Texas and Ski Strange of Copperas Cove, four brothers, Jim Strange of Idaho, Ronnie Strange of Florida, Bruce and Gary Strange, both of Kentucky, four sisters, Diane Trombley (Wayne) of Florida, Andy McMillen, Sally McKinney and Tina Adams, all of Kentucky, six grandchildren, Shelby Williams (Colton) of Arlington, Texas, Tyler Strange of Maryland, Savana and Jesse Strange, both of Gatesville, and Micaela and Loralea Strange, both of Kentucky. Numerous nieces and nephews also survive. The service to inurn Mr. Strange’s cremated remains will be held at 9:00 AM on Friday, June 18, 2021, at Central Texas Veterans Cemetery. Arrangements are entrusted to Heritage Funeral Home of Lampasas.

The family of Robert Strange created this Life Tributes page to make it easy to share your memories.

Send flowers to the Strange family.