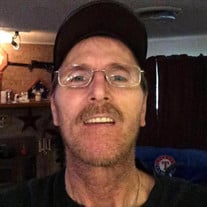 Robert Paul Smith, Jr., 62, of Kempner, Texas died at his residence surrounded by his family on September 5, 2021. He was born on February 13, 1959, in Salmon, Idaho, to Robert Paul Smith, Sr. and Sandra Worrell Smith. Robert married Laura Lee Johnson on October 30, 1982, in Redding, California. Robert and Laura had lived in Kempner, Texas since 1995, moving there from Sierra Vista, Arizona. Robert was a carpenter during his working life. However, what he viewed as his greatest accomplishment was raising three amazing children. He was a true family man. Robert is survived by his wife, Laura Smith of Kempner, two sons, Marcus Ty Smith, and wife, Noel of Woodstown, New Jersey, and Richard Anthony Smith, and wife Chantal of Copperas Cove, one daughter, Taylor Jane Smith of Copperas Cove, one brother, Christopher Locke of Copperas Cove, three sisters, Angela Brown, and Debra Coriell, both of Cottonwood, California and Patricia Locke of Fortuna, California. Robert has eight grandchildren, Matthew, Alexia, McKenzie, Richard, Lucius, and Nolan, of Copperas Cove and Riley and Chloe, of Woodstown, New Jersey. He is also survived by numerous loving relatives. He is preceded in death by his parents, one brother, Michael Smith and one sister, Anna Locke. There will be a family visitation time from 5:30-7:00 PM on Monday, September 13, 2021, at Heritage Funeral Home in Lampasas. Mr. Smith will be cremated. Memorial donations are invited to be made the American Cancer Society in memory of Robert. Arrangements are entrusted to Heritage Funeral Home of Lampasas.

The family of Robert Smith created this Life Tributes page to make it easy to share your memories.

Send flowers to the Smith family.