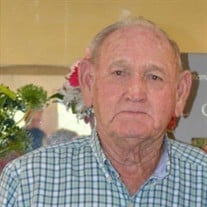 Robert Hollis Benoist, of Lampasas, passed away April 19, 2022 at his home. A celebration of his life will be at 2 pm Sunday, April 24 at Heritage Funeral Home, 401 N. Key Ave., Lampasas. Robert was born July 28, 1932, to Ben Dudley and Mable Clara Spurlin Benoist in Lampasas, Texas. He attended schools in Lampasas until the 6th grade, and determined school wasn’t for him. He was an old school MacGyver before MacGyver was cool. He was a jack of all trades and a master of none except carpentry. He served in the US Army for 3 years with a tour of duty in the Korean War. While on leave, he met Lois Irene Shipp in Washington. He worked in the carpentry shop at Ft. Hood through Civil Service. He was instrumental in helping build a lot of the on base housing for enlisted personnel and their families. He retired from Ft. Hood and did small carpentry jobs in town driving that Sandford and son pickup all over. It’s hard to reduce a man’s life to so few words except to say he had great parents, brothers, and extended family. He was married to the same woman for 66 years and provided for his family his entire life. He was a true man’s man and didn’t care too much for being politically correct. He did love to tell stories and most of us have heard the same ones many times. He was not perfect and wouldn’t like too much fuss being made over him. He accepted the Lord as his Savior and was baptized at Community Church where he loved his church family. He was first drawn to the Lord through the ministry of Reid Schaub, but all Glory goes to God. Robert knew the truth that a greater reward waited for him where there would be no teary eyes, death, mourning, crying, or pain, knowing that these old things would pass away, and all will one day become new. He was preceded in death by parents and brothers, Oliver, and Ben E. Benoist. Survivors include his wife, Lois Benoist; brother and best friend, James E. Benoist of Lampasas; sister-in-law, Arlie Lyons and husband Pat of Estacada, Oregon; children, Terry Bates and the late Rickey Bates of King, Texas, Clara Allison and husband Larry of Lampasas, Benny Benoist and the late Anita Gonzales Benoist of Lampasas; grandchildren, Justin Bates and wife Ciara, Cory Bates and wife Devon, Jennifer Hess and husband Tony, Christopher Pitts and wife Kathleen, James Allison and wife Kristi, John Allison and wife Kelly, Cayla Windish and husband Mike, Branden Benoist and wife Amanda; great grandchildren, Javi, Jace, Bryson, Waverly, Westlyn, Courtney, A. J., Kaleb, Cooper, Kayden, Lily, Ben, Jake, Gabriel, Jack, Ezra, Grant, Gavin, Elizabeth, Miranda, Robert, Ethan and Edward. The family would like to give special thanks to Amanda Allen and Roberta Morua for their excellent medical care and allowing him to still have his voice. We could not have done it without them. We would also like to thank Kindred Hospice for their kindness, and comfort in caring for him and our family in his last days. In lieu of flowers donations may be made to Lampasas Community Church, P.O. Box 20, or to the charity of choice. A livestream will be available at www.heritagefuneraltx.com under Mr. Robert Benoist’s name.

Robert Hollis Benoist, of Lampasas, passed away April 19, 2022 at his home. A celebration of his life will be at 2 pm Sunday, April 24 at Heritage Funeral Home, 401 N. Key Ave., Lampasas. Robert was born July 28, 1932, to Ben Dudley and Mable... View Obituary & Service Information

The family of Robert Benoist created this Life Tributes page to make it easy to share your memories.

Send flowers to the Benoist family.