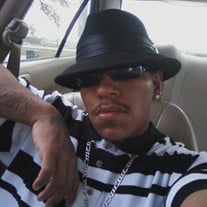 Richard Gonzales Torres, age 31, of Brownwood, passed away Friday evening, January 14, 2022, at his home with his loving family by his side. He was born May 10, 1990, in Winters, Texas, the son of Emilio Valdez Torres and Cecilia Gonzales Torres. He had been a resident of Brownwood most of his life. He loved to draw, he had a special love for low rider cars and had a strong loyalty to them, he loved to dance, especially breakdance, and was very protective of his friends and family. He was known to be a very well dressed individual and took great pride in his clothing. He had worked in the food industry previously. He is survived by his mother and father, Cecelia and Emilio Torres of Brownwood, his sister, Carmelita Sanchez and husband David of Austin, two brothers, James Torres and wife Cheynna of Odessa, and Emilio G. Torres of Brownwood, his grandmother, Elena Torres of Brownwood, a niece, Mia Sanchez, a nephew, David "Lil D" Sanchez, his uncle, Moinces Billolobos of Brownwood, and Tony Saul Gonzales and wife Veronica of San Antonio. Numerous cousins also survive as well as a host of friends. He was preceded in death by his grandfather, Emilio Munoz Torres. A visitation will be held from 6 - 8 PM on Friday, January 21, at the Davis-Morris Chapel of Heritage Funeral Home with a rosary recited at 7 PM. A celebration of his life will be held at 2 PM on Saturday, January 22, at the funeral home with burial to follow in the Greenleaf cemetery. Services entrusted to the care of Heritage Funeral Home, Davis-Morris Chapel of Brownwood. Friends and family are encouraged to view the online memorial at www.heritagefunraltx.com.

Richard Gonzales Torres, age 31, of Brownwood, passed away Friday evening, January 14, 2022, at his home with his loving family by his side. He was born May 10, 1990, in Winters, Texas, the son of Emilio Valdez Torres and Cecilia Gonzales Torres.... View Obituary & Service Information

The family of Richard Gonzales Torres created this Life Tributes page to make it easy to share your memories.

Send flowers to the Torres family.