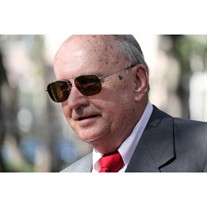 Richard "Dick" Thompson Mills of Austin, TX passed away Tuesday June 19th, 2018. Dick was born on December 26, 1935 in Norfolk Nebraska to his parents Robert & Eleanor Mills. After settling in Dallas, TX as a child, Dick graduated from Woodrow Wilson High School, attended Texas A&M University, served his country in the United States Army and was a 43-year resident of the West Lake Hills community in Austin. He was married to Connie Mills, who passed away in October 2001. He was also preceded in death by his parents, sister Joy Farrow, and son-in-law Stephen Best and will forever be remembered by his entire family and friends. Dick learned the utility construction trade from his father. After working in Dallas and Corpus Christi, he worked for 20 years helping to shape the Austin metroplex that we enjoy today, ultimately retiring as an executive vice president of a national utility contracting company. In addition to his career, Dick was a 32nd degree Mason, Shriner, and longtime member of the Lutheran Church. Outside of work, Dick enjoyed a 60 year passion for the outdoors. He spent countless weekends and vacations with friends and family on the Colorado River in San Saba County. When he retired, Dick purchased property in his home away from home, now known as the Five Star Ranch - named after his five children. Now part of his legacy, this property has served as the setting of countless memories for his children, grandchildren and great grandchildren - including Thanksgivings, first hunting trips and countless hours spent visiting around the campfire. Dick is survived by his brother Herb Mills and wife Joyce of Plano, TX, son Robert Mills and his wife Monica of Buda, TX, daughters Karen Brown and her husband David of Cedar Park, TX, Shanon Holley and her husband Aaron of Cedar Park, TX, Cheryle Best of Keller, TX, and Leuanna Valiente and her husband Rafa of Cedar Park, TX. In addition, Dick is survived by his fourteen grandchildren and eleven great-grandchildren. A memorial service and internment will be held at Harris Cemetery in San Saba County on Thursday, June 28th at 10 a.m., followed by a reception at the San Saba Civic Center. Arrangements are under the direction of Heritage Funeral Home in San Saba, TX. Memorial donations may be made to Shriners Hospitals for Children in lieu of flowers.

The family of Richard T Mills created this Life Tributes page to make it easy to share your memories.

Send flowers to the Mills family.