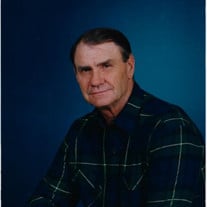 Richard Garner “Dooder“ McClatchy was born February 27, 1932. He grew up, farmed, and ranched in Brown and Coleman Counties his entire life. Dooder built a house for the love of his life as a proposal, and she said yes. He married Sammie Findley, and they were inseparable partners for 65 years. Dooder was an amazing athlete who won second at the state championship in the 220 and still holds the Bangs High School record for the 220 at 21.47 set in 1949. He was a star football player who was recruited to play for the U.S. Air Force. Dooder will be inducted into the Bangs ISD Dragon Hall of Honor posthumously September 3, 2021. FollowIng his family heritage, Dooder was a successful farmer and rancher. Dooder won Area 5 Farmer of the Year and runner up for the Texas Outstanding Farmer in 1965. Through his career, he had numerous Reserve and Grand Champion show pigs and steers. His love for stock shows continued throughout his years and could be seen through the numerous youth who showed his steers at stock shows throughout Texas. His legacy for the love of land and animals can still be seen in his family. Dooder is especially remembered for his “Dooderisms.” Many are printable; many are not. For example, a good athlete, animal, or anyone deserving praise he would describe as “Tough Enough.” When asked how he got the nickname “Dooder,” he would only grin mischievously. That secret went with him to his grave. He leaves behind his two children Ricky McClatchy and his wife Janie of San Antonio and Holly Gieb and her husband Buddy of Midland; his brother Pat McClatchy of Brownwood; 6 grandchildren and their spouses; 1 great-granddaughter; John Harper and his wife Donna; many loving nieces and nephews; and 2 special nephews. Dooder joins his parents Wiley and Carrie McClatchy, his beloved wife Sammie Findley McClatchy, and his good bud Danny Horton. Dooder was a good man—devoted husband, loving father, loyal friend, and mentor to numerous young people. Dooder was “Tough Enough.” The family would like to express their gratitude to the Senior Care Center and Solaris Hospice for their compassionate care. In lieu of flowers, please donate in his memory to Bangs ISD scholarship fund, PO Box 969, Bangs,Texas 76823. Visitation will be 6:00-8:00 Friday, July 9, at Davis-Morris Funeral Home. A private family graveside service will be held at the family ranch on Saturday, July 10.

Richard Garner &#8220;Dooder&#8220; McClatchy was born February 27, 1932. He grew up, farmed, and ranched in Brown and Coleman Counties his entire life. Dooder built a house for the love of his life as a proposal, and she said yes. He married... View Obituary & Service Information

The family of Richard Garner "Dooder" McClatchy created this Life Tributes page to make it easy to share your memories.

Send flowers to the McClatchy family.