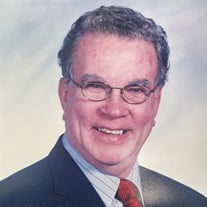 Richard Carroll Griffin, 83 of Lampasas, Texas, passed away on May 3, 2022. He was born on May 8, 1938, to Walter E.D. Griffin and Athen Alene Miller Griffin, in Abilene. Richard attended college at Hardin Simmons University and graduated from University of Houston. Richard's career spanned over 30 years as Labor & Safety Manager at Dow Chemical. He enjoyed collecting guns, playing the guitar, singing and writing songs. In his younger years, he enjoyed traveling, surfing, cycling, fishing and camping. Also, in his youth, he was a boy scout for many years and then he proudly became an Eagle Scout. He married Shera E. "Puffy" Griffin on May 7, 2004 in Blanco. They both were very active in church and loved to sing and play music. Richard was preceded in death by his parents and his sisters, Sharla Jean Griffin and Janis Kaye West. Survivors include his wife; his children, Richard D. Griffin of Sarasota FL, Ross L. Griffin of Austin and Jenny Bergeron of Colorado Springs, Colorado; his grandchildren, Ian J. Griffin of Thailand, Samantha E. Long of Cambodia, Ethan P. Bergeron and Ashley R. Bergeron of Colorado Springs; his great grandchild, Kali Joy Long of Cambodia; his brother, Kenneth A. Griffin of Katy; nieces, Rosalind L. Griffin of Katy, Madeline W. Ginn and Dinah W. Bolon of Crossroads and his nephew, Travis Miller Griffin of Leander. Richard was affectionately referred to as "Pop" by Puffy's children, Ricky E. Smith and Chuma S. Jerome; and her grandchildren, Cory, Colby, Nikki, Caleb, Summer, Levi, Jack, and Reed of Lampasas. A Celebration of Life will be held at First Baptist Church, 402 S. Key Ave., Lampasas, Texas on May 22, 2022 at 2 pm.

Richard Carroll Griffin, 83 of Lampasas, Texas, passed away on May 3, 2022. He was born on May 8, 1938, to Walter E.D. Griffin and Athen Alene Miller Griffin, in Abilene. Richard attended college at Hardin Simmons University and graduated from... View Obituary & Service Information

The family of Richard Griffin created this Life Tributes page to make it easy to share your memories.

Richard Carroll Griffin, 83 of Lampasas, Texas, passed away on...

Send flowers to the Griffin family.