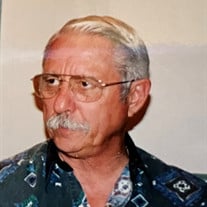 Richard Lowell Cone, age 80, of Lake Brownwood, passed away at his home on Friday, April 15, 2022. He was born on March 23, 1942, in Laurens, Iowa, the son of Lowell Cone and Doris (Dershem) Cone. Following graduation from high school, he attended college and obtained some college credit. He had been a resident of Brownwood for the past forty years and was married to Glynda Nelson on March 20, 1993. He was a member of the Christian Church and former owner of Rich Cone Air Conditioning and Heating which is now his sons, Aaron Cone Air Conditioning and Heating. He took great pride in his work. He was a true outdoorsman and loved his animals, especially horses, which he enjoyed on his ranch at Lake Brownwood. He was a former member of the Brown County Sheriff's Posse for many years as well as involved in several other community organizations. Rich had an infectious smile and was a people person. He also was known as a joker and loved to pull pranks on others, especially his family. He enjoyed traveling and seeing the country. He will be missed by many who knew him. He is survived by his wife, Glynda Cone of Brownwood, three daughters, Jill Weideman of Laurens, Iowa, Shannon McCallie of Bangs, and Alynda Millwee and husband Billy of Lake Brownwood, his son, Aaron Cone and wife Misty of Brownwood and a sister, Wanda Lane of Omaha, Nebraska. He is also survived by his grandchildren, Cody Weideman, Lyssa Greenrock, Xander McCallie, Mason Millwee, Jackson Millwee, Colton Cone, and Kaylee Cone as well as 2 great grandchildren. He was preceded in death by his parents and a sister, Lona Rolf. Funeral services will be held at 1 PM Saturday, April 23, in the Davis-Morris Chapel of Heritage Funeral Home with visitation on Friday evening from 5 - 7 PM. Memorials are requested to be made to the Brown County Sheriff's Department, Kindred Hospice, The Corrine T. Smith Animal Shelter, Wounded Warriors, or charity of the donor's choice. Services entrusted to the care of Heritage Funeral Home, Davis-Morris Chapel. Friends and family are encouraged to view the online memorial at www.heritagefuneraltx.com.

Richard Lowell Cone, age 80, of Lake Brownwood, passed away at his home on Friday, April 15, 2022. He was born on March 23, 1942, in Laurens, Iowa, the son of Lowell Cone and Doris (Dershem) Cone. Following graduation from high school, he... View Obituary & Service Information

The family of Richard Lowell Cone created this Life Tributes page to make it easy to share your memories.

Richard Lowell Cone, age 80, of Lake Brownwood, passed away at...

Send flowers to the Cone family.