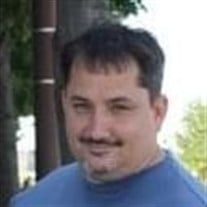 Perry M. Bedford II, age 56, of Brady, TX passed away on January 26, 2021. Perry was born on December 31,1964, in El Paso, TX. He will be laid to rest at Rest Haven Cemetery in Brady, TX. Perry was raised in Winter, TX, and graduated high school in 1983. He later went on to college at Angelo State University where he received a Bachelor of Science in 1991. Perry then married Tonya, the mother of his 2 children, in 1997. He worked devotedly at Texas Pawn, and then later as a dispatcher for Max Mahan Co. Inc and Watt & Stuart Trucking Inc. Perry spent the remaining years of his life in Brady, TX where he raised and cared for his family. Perry will be remembered as a loving father, brother, uncle, cousin, friend, and the greatest "Pops" to his grandchildren. He was also known as being a caregiver and provider to all. Perry was truly an angel walking on Earth. Perry enjoyed sports, being a die-hard Cowboys and Rangers fan, but more importantly being the #1 fan for his kids and grandkids in their activities. Perry ultimately enjoyed spending time with his family and friends having a good laugh. Perry is survived by his daughter, Alexis Fletcher, and her husband Cody of Brady, son, Isaiah Bedford, and wife Dakota, of Brady, and 2 grandchildren, Raegan "Raegy" Fletcher and Rankin "Gunny" Fletcher. He is also survived by honorary parents, Alexander and Yolanda Roque of Brady. Also, Perry has 3 brothers, 3 sisters, and numerous nieces and nephews that he all loved. Perry was preceded in death by parents, John Boyd and Nadine Bedford of Winters, TX and mother, Lareta Nance of Raton, NM. He was also preceded in death by his sister, Lisa Gray of Winters, TX. The pallbearers will be Isaiah Bedford, Cody Fletcher, Ricky Johnson, Roman Roque, Nathan Simmons, and Oscar Roque Jr. The honorary pallbearers are Rankin Fletcher, Kylar Simmons, and Ryland Simmons. Funeral arrangements are entrusted to Heritage Funeral Home of Brady.

Perry M. Bedford II, age 56, of Brady, TX passed away on January 26, 2021. Perry was born on December 31,1964, in El Paso, TX. He will be laid to rest at Rest Haven Cemetery in Brady, TX. Perry was raised in Winter, TX, and graduated high school... View Obituary & Service Information

The family of Perry M. Bedford created this Life Tributes page to make it easy to share your memories.

Send flowers to the Bedford family.