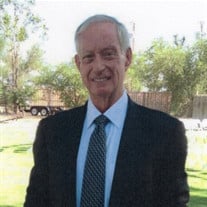 Paul Miller, Jr. of Houston, Texas passed from this life on Saturday, April 30, 2022, at Houston Methodist hospital at the age of 71. Funeral services will be held at 1:30 p.m. on Friday, May 6 in the Davis-Morris Chapel at the Heritage Funeral Home in Brownwood, Texas. He will be laid to rest in the Pleasant Valley Cemetery following the service. The family will receive friends at the funeral home on Thursday evening 6:00 - 8:00 p.m. Paul David Miller, Jr. was born on January 4, 1951, in Fort Worth, Texas to Paul David Miller, Sr. and May Hays Miller. He graduated from Haynesville High School in Louisiana in 1969. He attended Louisiana Tech University where he earned a Bachelor of Science in Mechanical Engineering. Paul had a lengthy career in the oil industry and was an expert in his field of offshore drilling. He was recruited to work all over the world including Libya, Columbia, New Guinea, Mexico, Sahara Desert, Australia, among other countries. Paul valued time with his family and friends. He was a long-time member of The Houstonian health club where he exercised and interacted with many friends. He was an outdoor enthusiast and enjoyed hunting by bow, rifle, and shotgun. He also was a member of the Houston Gun Club where he was a competitive shooter in sporting clays. Paul enjoyed history, and he read and collected books on many topics. He is survived by his cousins: Bryce Anne Passmore and husband Lynn of Brownwood, Rebecca Middleton and husband Mike of Brownwood, Linda Crawford and husband Richard of Boerne, and other cousins. Lily Hakimi has been a very special friend to Paul this last year. He was preceded in death by his parents and his Hays family cousins: Gene Hays, Maxine Hays Taylor, Elwanda Hays Ward, Bettie Hays Thomas, and Ronnie Hays, Sr. Paul had a big heart for animals, and during his life he enjoyed the companionship of his two special rescued dogs and a cat. Therefore, the family requests that memorials be made in Paul's memory to your local animal shelter or the American Heart Association. Services entrusted to the care of Heritage Funeral Home, Davis-Morris Chapel. Friends and family are encouraged to view the online memorial at www.heritagefuneraltx.com.

Paul Miller, Jr. of Houston, Texas passed from this life on Saturday, April 30, 2022, at Houston Methodist hospital at the age of 71. Funeral services will be held at 1:30 p.m. on Friday, May 6 in the Davis-Morris Chapel at the Heritage Funeral... View Obituary & Service Information

The family of Paul D Miller, JR created this Life Tributes page to make it easy to share your memories.

Paul Miller, Jr. of Houston, Texas passed from this life on Saturday,...

Send flowers to the Miller family.