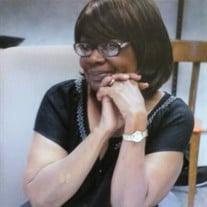 Patsy Nell Cole Buckner, the daughter of the late Robert Ellis, III and Laura Ann (Stanfield) Menefield, was born on June 4, 1947 in Brady, Texas and went home to be with her Lord on December 9, 2021. Patsy attended public school in Brady. She married Alvin B. Cole, Jr. in 1963. She later married Merle Chiles in 1971. She then married Lawrence "School Boy" Buckner in 2000. She moved her family to California, where she began her banking career in Los Angeles, California with Imperial Bank in 1972 and eventually raising her children in Compton and Long Beach, California. Patsy moved back to Brady, Texas in 1988 where she worked for Brady National Bank, where she was affectionately called "The Sheriff" and temporarily at Wal-Mart in the Accounting Department. She retired from Brady National Bank in 2020. She was passionate about her music and dancing and loved having her family around her all the time. BBQing in the yard with music, family and friends always brought her joy. Her favorite song was "Tennessee Whiskey" and everybody in town knew it. She loved looking good in her wigs and having her nails done. Patsy was the treasurer for Willie Washington Park Foundation and played a very instrumental part in getting the new park equipment. She was a member of the Mt. Moriah Church where she was the Treasurer. The only title she did not hold in the church was Pastor. She never met a stranger - if you needed a place to stay, she provided shelter; needed a meal, she made sure you were fed; if it was cold outside, she would give her coat off her back. If you needed motivation, inspiration or encouragement she would freely give it. Patsy was preceded in death by her parents Robert Ellis III and Laura Ann Menefield, grandparents John Henry and Emma Stanfield, son Woodie LaFrance Cole, her husbands Alvin Cole, Merle Chiles and Lawrence Buckner, her in-laws Evangelist Alvin B. and Corine Cole, one brother-in-law Lamar Cole, and sister-in-law Hazel Cole. Patsy is survived by her children, Alvin D. Cole and wife Sharon of Brady, Tracey Cole of DeSoto, Darren Cole and wife Christy of Ft. Worth, and Acen Chiles and Teresa of Montana; grandchildren, Dominique Robinson, Symphanie Maldonado and husband Junior, Alvin LaFrance Cole, Kwana Cole, Jacob Ortiz, Jasmyn Favard, Preshion Chiles, Dreah Chiles, Elliani Cole, Aramis Cole and Trinity Cole; great-grandchildren, Tristan and Kaiden Maldonado, Genesis and Chancelor Robinson, King Ortiz, and a granddaughter on the way. She is also survived by siblings Roberta Menefield-Lewis and husband Jesse, Connie Randle and husband Ed Jr., Donald Menefield, Farris Moreno and husband Isabel, Wanda Menefield and Robert Menefield IV; sisters-in-law, Edna Johnson, Delores Wright, Gloria Wilson, and Beverly Blanks and brother-in-law Loredo Cole; and also by several nieces and nephews. Visitation will be held from 6:00 PM to 7:00 PM on Thursday, December 16, 2021 at Heritage Funeral Home in Brady. Going home services will be held at 2:00 PM on Friday, December 17, 2021 at the First Baptist Church in Brady, Texas with Aaron Blake, Vernon Jones, Butch Williams and Rev. Ernest Kirk officiating. Arrangements are entrusted to Heritage Funeral Home of Brady. Please view Ms. Patsy Cole-Buckner's online memorial at www.heritagefuneralhomes.com

Patsy Nell Cole Buckner, the daughter of the late Robert Ellis, III and Laura Ann (Stanfield) Menefield, was born on June 4, 1947 in Brady, Texas and went home to be with her Lord on December 9, 2021. Patsy attended public school in Brady.... View Obituary & Service Information

The family of Patsy Buckner created this Life Tributes page to make it easy to share your memories.

Send flowers to the Buckner family.