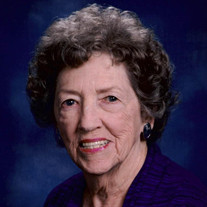 Ouita Fay Hampton was born June 11, 1929 in Brady, Texas to William G. and Ora Ethel Tatum Hampton. She was the 8th born of their 9 children. Ouita graduated from Brady High School in 1946. She attended the University of Texas at Austin for a year before dating and marrying David Bratton on October 25, 1947. After a Texas tour honeymoon that took them to Fredericksburg, Huntsville and the prison rodeo, Houston and the Rice Hotel, Galveston, back to west Texas to Del Rio and Ma Crosby’s, Marfa, and San Angelo and finally back home to the Bratton Ranch near Rochelle, where real adventures began. She and David spent the next 62 years until his death in 2010, raising livestock, 4 children and growing and improving the ranch on the land they loved. As David’s partner, she was involved in the Texas Sheep and Goat Raisers, Make it Yourself with Wool contests, and Soil and Water Conservation. They loved to travel and especially in later years took wonderful trips or fun weekend jaunts with the great friends with other ranching families they had made along the way. Ouita was a wonderful cook and hostess. The table was always open at the ranch whether for business or pleasure. Thanksgiving was the holiday were all the kids came to Granny’s to fill the round kitchen table and an ever-growing number of kid tables. Ouita was a volunteer at the Heart of Texas Music Museum, member of Mary Martha Circle, and Redhats. She was a lifelong member of the First United Methodist Church of Brady. She is preceded in death by her husband, parents, siblings, Lewis Hampton, Bob Hampton, Annie Mae Hampton, Frances Shaw, Weldon Hampton, Bill Hampton, JD Hampton, and Richard Hampton. She is also preceded by her sister-in-law, Laurissa Rawlings and husband Wayne. Survivors include 3 sons, Lewis Bratton, Don Bratton and wife Kitty of Rochelle, Bill Bratton and wife Bette of Stafford, and daughter, Mitzi Angly and husband Trey of Spicewood; 5 granddaughters, Kimbra and husband Michael Hobbs, Mandy and husband Tony Chacon, Brayla and husband Patrick Roberts, Brezin and husband Oscar Roque, and Louisa Angly; 7 grandsons, Travis Bratton and wife Meagan, Bronco Bratton and fiancée Desarae Webb, Reece Angly, David Angly, Will Bratton and wife Chelsea, Eli Bratton and wife Brittany, and Ben Bratton and wife Melyssa; 16 great-grandchildren; several nephews and nieces; a special cousin and a host of friends. Memorials may be made to a charity of choice. Pallbearers include Travis Bratton, Bronco Bratton, Reece Angly, David Angly, Will Bratton, Eli Bratton, Ben Bratton, and Johnny Wayne Jones. Funeral arrangements are entrusted to Heritage Funeral Home of Brady.

Ouita Fay Hampton was born June 11, 1929 in Brady, Texas to William G. and Ora Ethel Tatum Hampton. She was the 8th born of their 9 children. Ouita graduated from Brady High School in 1946. She attended the University of Texas at Austin for... View Obituary & Service Information

The family of Ouita F. Bratton created this Life Tributes page to make it easy to share your memories.

Send flowers to the Bratton family.