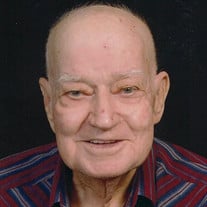 Otha LaFay Holloway, 93, passed away Monday, March 9, 2020, at Heart of Texas Healthcare System in Brady after a short illness. Otha was born at home in Fredonia, Dec. 1, 1926, to Othey and Zoie (Garrett) Holloway. He graduated from Pontotoc School and married Norma Gene Flanagin Feb. 26, 1945, in Mason. He was drafted into the U.S. Army on April 24, 1945. He boarded a ship in California to Japan where he served two years, helping rebuild Japan after World War II ended. Upon returning home, he drove a Holsum bread truck to Brady from Mason. He worked at a service station owned by L.E. Scott for a short time, then Norman Motors for 35 years, retiring in 1988. Two children were born to Otha and Norma Gene, Norma Faye (Holloway) Zumwalt, July 23, 1949, and James Otha Holloway, March 15, 1954. He is survived by three grandchildren and seven great-grandchildren: Chris, wife, Heather, Hadlee, Camryn and Holden Holloway of Shippensburg, PA., Robert, wife, Sherry, and Carissa Holloway of Flint, and Annie, husband, James, Taelor, Paeton and Parker Singleton of Belton; and nieces and nephews. He was preceded in death, by his wife, Norma Gene; parents, Othey and Zoie Holloway; and two brothers, Lawton and Arlis Holloway. His hobbies included fishing, hunting, viewing bluebonnets and wildflowers in spring. He loved attending sporting events and band programs for his three grandchildren during their school days. He owned a small stock farm where he raised goats and cattle at Fredonia until recently. Visitation for Otha Holloway will be held Wednesday, March 11, 2020 from 6:00 - 8:00 PM at Heritage Funeral Home. The funeral service will be Thursday, March 12, 2020 at 10:30 AM at Heritage Funeral Home. Burial will follow in Rest Haven Cemetery in Brady. Funeral arrangements are entrusted to Heritage Funeral Home of Brady.

Otha LaFay Holloway, 93, passed away Monday, March 9, 2020, at Heart of Texas Healthcare System in Brady after a short illness. Otha was born at home in Fredonia, Dec. 1, 1926, to Othey and Zoie (Garrett) Holloway. He graduated from Pontotoc... View Obituary & Service Information

The family of Otha LaFay Holloway created this Life Tributes page to make it easy to share your memories.

Send flowers to the Holloway family.