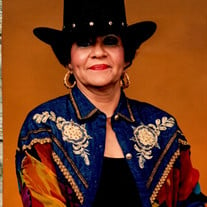 Onesima Mary Ramos, age 80, of Brownwood passed away Wednesday, October 6, 2021, evening at the Songbird Lodge Nursing Home. She was born February 16, 1941, in Paducah, Texas the daughter of Geronimo and Dominga Loredo Mindieta. She had lived in Brownwood most of her life and was the former owner of Mexico Inn Restaurant and La Paloma Ballroom and had also owned restaurants in San Angelo and Brady. She loved to cook for her family and especially large gatherings. She was known as a very charitable person and also very artistic with flowers and especially wreaths. She is survived by her son Randall Ramos and wife Irma of San Angelo, four daughters, Annie Ramos of Garden City, Michigan, Patricia Ramos of Stone Mountain, Georgia, Tina Ramos of San Antonio, and Sonya Ramos of Wellford, South Carolina. She is also survived by a sister, Pauline Saucillo of Brownwood and a brother, Geronimo Mindieta Jr. of Early as well as fourteen grandchildren and thirty-one great-grandchildren and one on the way. She was preceded in death by her parents, a son, Daniel Ramos III, a sister, Regina Garza, and two brothers, Nemo and Lalo Mindieta and her ex-husband, Daniel H. Ramos Jr. Funeral Mass will be celebrated at 11 am on Monday, October 11, 2021, at Saint Mary's Catholic Church with burial to follow at Greenleaf Cemetery. Visitation and the reciting of the Rosary will be from 6 - 8 on Sunday evening at the Davis-Morris Chapel of Heritage Funeral Home in Brownwood. The family would like to extend their greatest thanks to Songbird Lodge for the loving care and kindness given to their loved one. Funeral arrangements have been entrusted to the care of Heritage Funeral Home, Davis-Morris Chapel in Brownwood. Friends and Family are encouraged to view the online memorial at www.heritagefuneraltx.com.

Onesima Mary Ramos, age 80, of Brownwood passed away Wednesday, October 6, 2021, evening at the Songbird Lodge Nursing Home. She was born February 16, 1941, in Paducah, Texas the daughter of Geronimo and Dominga Loredo Mindieta. She had lived... View Obituary & Service Information

The family of Onesima M Ramos created this Life Tributes page to make it easy to share your memories.

Send flowers to the Ramos family.