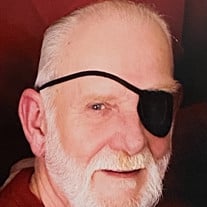 On Monday, December 6, 2021, at 8:00 pm, Michael Cox Rogers took his last earthly breath leaving this life to finally stand before his Father in Heaven and claim his new body and begin his eternal worship of his Lord and Savior, Jesus Christ. Michael was born on June 7, 1942, the son of Norman Paul and Jennette Cox Rogers in Pasadena, Texas. He was the middle of three children having an older sister Paula and a younger brother Patrick, both of whom contributed to some of the best memories of his childhood growing up. Michael or "Mike" to his family and friends, "Dad" or "Daddy" to his two daughters, "Papa" (Poppa) to his grandchildren, "Uncle Mike" to his four nieces and two nephews, but to Jesus, he was simply known as Son. Mike served his country as a proud member of the United States Navy, first as a machinist mate aboard the battleship Lexington followed by service on the Bellatrix. He received an honorable discharge in 1963. Shortly after leaving the Navy, he married the love of his life, Priscilla Lynn Herring on May 31, 1963. After enjoying several years together as husband and wife, they welcomed their dearly loved daughter and first born, Kelly Lynn into the world on June 15, 1970. Six years later and much to Kelly's dismay, "the closest thing to a son I'll ever have," said Michael on many occasions, on September 16, 1976, Carrie Cathleen was born. Mike was a proud retiree of Houston Lighting and Power Co. having given 35 years of valuable service as a Supervisor of Operations, a job that anyone who had the privilege of knowing him quickly learned that "this good old boy" was actually a brilliant man who knew a little something just about everything. One of his favorite things to do with his oldest daughter was to watch Jeopardy every afternoon while his youngest daughter, Carrie, watched the two of them whip-up on just about every contestant that participated, a true sight to see. When Carrie married Juan Israel Perez, Mike gained the son he thought he'd never have and treasured him as a true member of the Rogers family. Then came the very reason for living: two amazing grandchildren - a beautiful granddaughter by the name of Jordan Bailey Perez in 2001 and a grandson by the name of Benjamin Juan-Michael Perez. He was so very proud of the amazing people they have become. The lives that became to be from the life that Mike lived was the result and an echo of the kind of man he was, a man who loved his family with a deep and abiding love. Mike was also a very close and good friend of Bill W. and made many friends and lasting relationships with those who called Bill W. a friend. Mike was a member of Coggin Ave. Baptist Church. As per Mike's wishes, a simple graveside service will be held at 1 PM on Saturday, December 11, at the Bangs Cemetery with Raymond Perez officiating. A visitation will be held from 5 - 7PM on Friday at the Davis-Morris Chapel of Heritage Funeral Home. If you knew Mike or were friends with Bill W., our family would be honored and thrilled to welcome you to our time of remembering Mike Rogers. Mike was preceded in death by his father, Norman Paul Rogers, his mother, Jennette Cox Rogers, his sister, Paula Blank, and his brother-in-law, Wesley Blank. Those left to mourn his passing are his wife, Priscilla Herring Rogers of Bangs, his oldest daughter, Kelly Lynn Rogers of Brownwood, his daughter Carrie Rogers Perez and her husband Juan Israel Perez of Bangs, and his deeply and dearly loved grandchildren, Josiah Michael Newman of Lubbock, Jordan Bailey and Benjamin Juan-Michael Perez of Bangs, his brother and sister-in-law, Pat and Patricia Rogers of Huffman, Texas and his many nieces and nephews. Services have been entrusted to the care of Heritage Funeral Home, Davis-Morris Chapel and friends and family are encouraged to view the online memorial at www.heritagefuneraltx.com.

On Monday, December 6, 2021, at 8:00 pm, Michael Cox Rogers took his last earthly breath leaving this life to finally stand before his Father in Heaven and claim his new body and begin his eternal worship of his Lord and Savior, Jesus Christ. Michael... View Obituary & Service Information

The family of Michael Cox Rogers created this Life Tributes page to make it easy to share your memories.

Send flowers to the Rogers family.